How To Turn China's A2/AD Strategy Back on Them 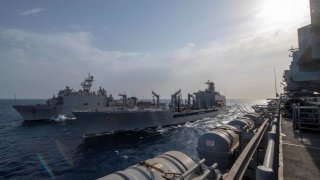 Key Point: Access is an important and too often forgotten part of military strategy.

Last week the Pentagon released two appraisals of China in swift succession. The first, issued by the Defense Intelligence Agency (DIA), goes by the title China Military Power and is patterned on the old-school Soviet Military Power tomes beloved by those of us of a vintage to have battled godless communism during the 1980s.

James Holmes is J. C. Wylie Chair of Maritime Strategy at the Naval War College, coauthor of Red Star over the Pacific (new in print last month), and author of A Brief Guide to Maritime Strategy (forthcoming this November). The views voiced here are his alone.​ This piece was originally featured in January 2019 and is being republished due to reader's interest.
Image: Reuters