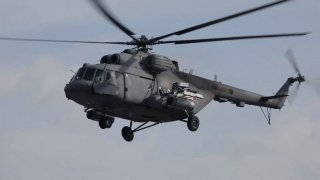 Ukrainian forces may be dispersing some of their command structures to limit the impacts of Russian cyber attacks.

Russia’s electronic warfare capabilities have been noted since its 2014 invasion of the Donbas region in eastern Ukraine. More recent efforts to conduct cyber warfare and electronic warfare against the Ukrainians appear to be less successful, though.

“On the Ukrainian side they are able to mitigate some of the challenges of Russian cyber and jamming because they are conducting command and control in a decentralized way,” retired U.S. Army Lt. Gen. Ben Hodges told The National Interest in an interview. Hodges served as commander of U.S. Army Europe from 2014-2017.

Electronic warfare can be used to jam electronic signals from radar systems, radio frequencies, or guided weapons to blind or disrupt enemy operations. Decentralizing these assets within a combat system can help ensure connectivity without relying on a single command and control structure that could be targeted more easily.

Hodges said the Russians may not have the experience to target and attack disaggregated operations, which would be more difficult to locate. A centralized command and control structure would emit a substantial electronic signal and be quite detectable to Russian electronic warfare sensors.

“The Russians are a very centralized system,” Hodges said. “They are not terribly proficient and experienced conducting large-scale joint operations. That has been apparent given their inability to be properly synchronized.”

Hodges said the Ukrainians are likely to be operating with just radios, without next-generation networking equipment and sensors. Ukrainians are also likely employing strategies that may be effectively averting Russian electronic warfare efforts to locate what’s called a “line of bearing,” or electronic signature.

Electronic warfare can be difficult to execute. When an electronic signature is emitted, the emitting location becomes detectable to an enemy. This means the Ukrainians would have to keep radios turned off when possible to decrease the likelihood of being detected.