How the U.S. Air Force Makes Sure the F-22 Raptor Dominates the Skies 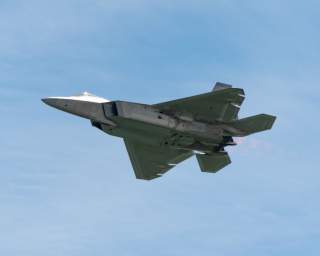 As the Air Force and Lockheed Martin move forward with weapons envelope expansions and enhancements for the F-22, there is of course a commensurate need to upgrade software and its on-board sensors to adjust to emerging future threats, industry developers explained. Ultimately, this effort will lead the Air Force to draft up requirements for new F-22 sensors, Lockheed developers said.

(Washington, D.C.) The US Air Force is now integrating new weapons onto 143 F-22s to massively expand their target envelope, air-to-air attack range and lock-on-launch precision -- to preserve the widely held belief that the stealth fighter is the most advanced and dominant air-to-air fighter ever to exist.

F-22s will be able to track and destroy enemy targets flying behind them, hit air targets with much greater force, precision and destructive power and include new GPS jam-resistant technologies, developers explain.

Actual integration of the new, upgraded weapons -- which include the AIM-9X and AIM-120D missiles -- begins this May, according to the 2018 Air Force Annual Acquisition Report. The weapons expansion is part on an ongoing, multi-year upgrade called 3.2B during which the weapons improvements were prototyped, tested, demonstrated and validated. Now, the Air Force Report says - they are operational and ready for war.

The F-22 Increment 3.2B program upgrades the F-22A with the latest air-to-air weaponry (AIM-9X and AIM-120D), adds additional electronic protection techniques to guard against emerging threats and improves the network-centric warfare capabilities of the aircraft,” the Air Force annual aquisition report states.

“This strategy ensures minimal down time and returns the upgraded jets to the warfighter at the fastest rate possible,” the Air Force report states.

“It is a much more agile missile with an improved seeker and a better field of regard. You can shoot over your shoulder. If enemies get behind me in a close-in fight, I have the right targeting on the plane to shoot them,” Ken Merchant, Vice President, F-22, Lockheed, told Warrior Maven in an interview last year. Merchant, who spoke to Warrior during an earlier developmental phase of the program, was familiar with how the new weapon will impact F-22 lethality.

As the Air Force and Lockheed Martin move forward with weapons envelope expansions and enhancements for the F-22, there is of course a commensurate need to upgrade software and its on-board sensors to adjust to emerging future threats, industry developers explained. Ultimately, this effort will lead the Air Force to draft up requirements for new F-22 sensors, Lockheed developers said.

The acquisition report also explains that F-22 lethality is also getting vastly improved through integration of new two-way LINK 16 data link connectivity between aircraft, something which will help expedite real-time airborne “collaborative targeting.”

“We have had LINK 16 receive, but we have not been able to share what is on the Raptor digitally. We have been doing it all through voice,” Merchant said.

The Air Force has also been working with Lockheed to sustain and renew the stealth coating material on the F-22.

"Periodic maintenance is required to maintain the special exterior coatings that contribute to the 5th Generation Raptor's Very Low Observable radar cross-section," a Lockheed statement at the time said.

While many details of its particular composition are, naturally, not available for security reasons, the coating contains special Radar Absorbing Materials designed to “keep radio waves from returning to the receiver.” This prevents enemy radar from receiving any kind of “rendering” of the aircraft, according to a 2015 essay called the “Feasibility Study of a Stealth Missile for Military Application,” from Embry-Riddle Aeronautical University.

“RAM creates electromagnetic interference that allow for the absorption of many frequencies of electromagnetic waves which are transmitted by radar,” the essay writes (Javan A. Roussel).