How U.S. and Israeli Stealth F-35 are Training for War Together 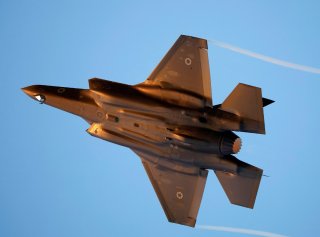 U.S. and Israeli F-35s are teaming up to attack mock targets in the Middle East as part of collaborative, joint-training exercises to prepare for war in the region, a development that clearly seems to introduce significant new tactical and strategic advantages for both countries.

The joint training, announced in a Press Release from U.S. Air Force Central Command, was described in a report from Air Force Magazine as combat training over Israel with U.S. F-35s from the USAF 421st Expeditionary Fighter Squadron and F-35I “Adir” fighters from the Israeli Air Force’s 116th Squadron.

So what are the possible implications or advantages of this kind of joint U.S.-Israeli F-35 attack?

The first and most obvious might be the prospect of a joint attack on Iran, or at least a visible effort to deter Iranian hostilities or provocations with a collaborative show of force.

Also, there is a reason why the U.S. Air Force seeks more than 1,700 F-35s .. they massively complement one another in a variety of respects. Not only can they immediately network to one another through a secure, high-speed data link, but they can travel in concentrated squadrons to add large amounts of stand-in firepower, or rely upon high-fidelity, long-range sensors to disaggregate and cover wide swaths of territory. Such F-35 teaming, given the technical configuration of the F-35, can also greatly optimize the aircraft ISR functions.

The F-35s Distributed Aperture System, a 360-degree system of surrounding cameras lead many to liken the 5th-gen aircraft’s technical capacities to advanced drone surveillance; its drone like ability to gather, organize and share relevant targeting, video stream, and sensor data over unprecedented ranges introduce new tactical dimensions to combat.  One small group of F-35s could surveil a high-risk area, using stealth and speed to elude precise detection, and send intelligence and targeting data to other F-35s miles away. This brings an opportunity to reinforce attack firepower, add close air support, or blanket an area with new surveillance vectors.

Simply put, larger numbers of F-35s networked together vastly expands the reach of air supremacy over hostile territory and extend attack envelope possibilities over much broader areas.  An F-35s Electro-Optical Targeting System, known through exercises to have the range to find enemy fighters without itself being seen, might detect an incoming fleet of enemy fighter jets and seek additional surveillance and fire support. While able to dogfight, the multi-role fighter is engineered to attack and destroy large numbers of enemy aircraft while not being detected itself. Interestingly, the aircraft has demonstrated this in previous combat training exercises.

Finally, more F-35s mean more computing power. Often referred to as a “flying computer,” the F-35 is engineered to gather and fuse vast amounts of otherwise disparate pools of data such as targeting, navigational and surveillance information.  Flying groups of F-35s together, connected through a secure data-sharing link, might increasingly be able to perform a kind of “collective fusion,” meaning an analysis of already organized data between otherwise separated F-35s.