How the U.S. Army Is Gearing Up for Multi-Domain Ground War 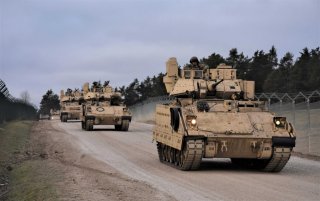 Two distinct yet closely synchronized U.S. Army entities are collaborating to optimize the service’s ability to prevail in a future ground war by maturing multi-pronged analysis related to emerging technologies and the need to adapt warfare strategies and tactics.

Army Futures Command and the service's acquisition arm, the Office of the Assistant Secretary of the Army - Acquisition, Logistics and Technology (ASA ALT), are working together to navigate the uncertain and potentially turbulent waters of future conflict.

“I'm eagerly anticipating the work being done by futures on new force designs, I think they are correct in identifying the technology is changing. So as always, the Army's formations probably need to change at some point. So I think that that's good analysis work that's ongoing, and I think they're doing well based on a little bit that I've seen,” Douglas Bush, Assistant Secretary of the Army, Acquisition, Logistics and Technology, told The National Interest in an interview.

The partnership between Army Futures Command and ASA ALT is intended to align innovations and weapons development with the need to adapt combat maneuver formations in response to a changing threat landscape. Future warfare will be faster, multidomain, and more dispersed, something Bush said will be driven by the growing prevalence of long-range fires with increased range and precision. There continues to be careful and detailed collaborative work between the two interwoven entities to ensure paradigm-changing new technologies correctly inform emerging concepts of operation.

“I think my role will be to try to get ahead of that and think in terms of time if we're going to have new formations at some point.  When would the new equipment come in? And then when would you need to start acquisition programs and line up the funding for those things,” Bush said.

As Bush indicated, timing will be critical to properly synergize new combined arms maneuver tactics and strategies with the specific ways in which new technologies enable different operational possibilities.

For instance, long-range precision fires, fortified by aerial sensors through secure multi-domain connectivity, will continue to enable more dispersed yet interconnected warfare.  An ability to use artificial intelligence to truncate sensor-to-shooter time, with the aim of getting ahead of or inside of an adversary’s decision cycle, will increasingly enable forward shooters to close in on and destroy enemy targets. Naturally, this means groups of interconnected forward-operating weapons systems, platforms, and networked manned-unmanned formations can attack much faster and with greater precision from multiple domains.

A mechanized force, for instance, will be less condensed and better connected by a meshed net of long-range sensors. This will allow the force to maintain a more dispersed and precise attack. Long-range sensors, hardened networking, faster data processing, and multi-domain connectivity can enable attacking forces to disaggregate, operate with unmanned systems, and launch coordinated, precise, fast-moving attack formations.