The U.S. Army Might Have A Long-Range Fire Problem 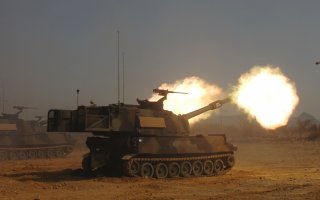 Here's What You Need to Know: The howitzer still has an important place on the battlefield of the twenty-first-century.

Earlier this year the U.S. Army conducted a live-fire demonstration of its upgraded M1907A7 Paladin, which will provide increased combat capability as well as sustainment of the Army’s Armored Brigade Combat Teams. While the new variant of the Paladin will offer improved overall performance—boosted by the use of the Excalibur rocket-assisted projectiles—it is still outranged by existing Russian and Chinese artillery systems.

The Army Futures Command had seen that there is still room for improvement and turned to small business innovators to study and develop the solutions to improve the rate of fire and performance of the M109A7, which is the latest upgraded version of the Paladin produced by BAE Systems. It will remain the primary indirect fire support system for the U.S. ABCT.

The current program, which is managed by the Long-Range Precision Fires (LRPF) Cross-Functional Team (CFT), has strived to work on increasing range, accuracy and rate of fire. Key to these efforts is getting the soldiers who will actually use the platform involved early.

Addressing reliability and survivability of the crews has been crucial, explained Brig. Gen. John Rafferty, director of LRFP.

“Our approach to addressing what our adversaries have been doing while we’ve been consumed for almost 20 years by operations in the Middle East, our adversaries went to school on how we fight. They’ve been investing in ways that offset our advantage,” Rafferty told The National Interest.

The long-range capabilities that China and Russia now have are concerning and could impact the U.S. military at both the strategic and tactical levels. As a result, the U.S. Army must now invest in long range artillery to ensure that it can hit back and put any potential adversary at the disadvantage.

Howitzers for the 21st Century

In an era where world powers are pressing the development of hypersonic weapons, it would seem that the howitzer could be a relic of a bygone age. First employed as medium-trajectory weapons in the late sixteenth-century, the howitzer still has an important place on the battlefield of the twenty-first-century.

The platform is an improved self-propelled howitzer with a longer gun tube and improved breach and along with its super charged propellant has a range out to 70 km, noted Rafferty.

“It’s the improved projectiles that will do a couple of things: provide suppressing and neutralization effects out to 70 km, and then also kill tanks and armored vehicles at those extended ranges,” he added. “And then it’s the course-correcting fuses that provide the accuracy so that we deliver at those ranges, used for lethality. That’s the key. And over time we’ll improve the rate of fire so we’re able to deliver a higher volume of fire against our adversaries.”

The CFT is on track to deliver the platform in 2023, when it will go through a yearlong assessment. This is critical as well, because such a platform needs to be complimentary with the Army’s other platforms.

Throughout much of the history of howitzers “close enough” was often good enough, but the improved Paladin will be able to utilize space-based and high terrestrial target systems with accuracy at extended ranges. Rafferty said that along with the more lethal ammunition, by being able to streamline the sensor to shooter target line, the Army will be able to reach targets at greater distances and with pinpoint accuracy.

The Role of Automation

Also complimenting the ammunition is the Army’s investment in artificial intelligence and machine learning, which can sort through the information and data gathered by the various sensors to locate a target.

“This AI-enabled program and these algorithms are being trained every day right now to find targets in this quantity of information,” said Brig. Gen. Rafferty. “Then it will generate the call for fire, following the rules that commanders put in place, the rules being combat geometries, rules being a high-payoff target list, rules being the target selection standard - so what degree of fidelity do we need on that target acquisition. How old is it, how quickly do we have to act on it. We are a rules-based organization when it comes to application of fires, so it makes it very well suited to application of artificial intelligence and machine learning. We are absolutely headed in that direction.”

While some might express fears that this could bring the world one step closer to “killer robots,” the normal rules of engagement would still apply, and Rafferty added that the AI will be controlled by the rules based on what the commanders want it to do.

At the same time, the team does see the concern that any platform that relies too much on technology could be creating a situation prone to failure if anything goes wrong. The more complicated the software and hardware, the more likely there could be a problem.

“We recognize that technology will have a balance, and we have considered how much we will rely on it and have a manual backup,” said Brig. Gen. Rafferty. “We don’t want to be entirely reliant on one technology, and we also know that we have to harden the technology so that it can’t be compromised by the enemy.”

As the CFT has already spent much of December at the Yuma Proving Grounds in Arizona, it is getting closer to ensuring that the development of the prototypes is moving forward.

“It is off the drawing board,” said Col. Tim Fuller of the program executive office ground combat systems. “It is an exciting time and it is very much on track and on schedule for 2023.”

“This is the culmination of a campaign of learning,” said Gibbs. “This whole package is really revolutionary. It is a major leap ahead in terms of capability.”