How the U.S. Army Wants to Use Electrical Signals from the Human Brain to Win in Combat 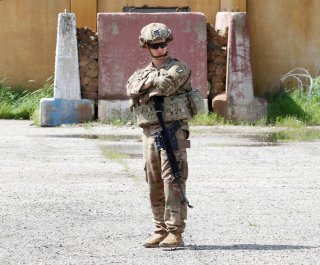 What if a dismounted squad is navigating rigorous terrain amid high-intensity combat, tasked with finding enemy Humvees, yet the enemy targets are dispersed and hidden?

However, what if the squad used AI and computers to find the enemy instead of trying to overcome all of their environmental and line-of-sight challenges? Enemy force location patterns and information from multiple soldiers’ viewpoints might all be instantly calculated and fed back to soldiers and decision makers in a matter of seconds.

This concept, designed to use biological elements of the human brain as sensors, is fast evolving at the Army Research Laboratory. The science is based upon connecting high-tech, AI-empowered sensors with the electro-chemical energy emerging from the human brain. A signal from the brain, scientists explained, can be captured “before the brain can cognitively do something.”

Electrical signals emitted by the human brain resulting from visual responses to objects seen can be instantly harnessed and merged with analytical computer systems to identify moments and locations of great combat relevance. This is accomplished by attaching a conformal piece of equipment to soldier glasses, engineered to pick up and transmit neurological responses.

“The computer can now map it if, when a soldier looks at something, it intrigues them. The human brain can be part of a sensing network,” J. Corde Lane, Ph.D.,Director, Human Research and Engineering, Combat Capabilities Development Command, Army Research Laboratory, told The National Interest in an interview.

Perhaps an entire group of soldiers all see something at once, yet from different angles. That response data can then instantly be aggregated and analyzed to, if needed, dispatch a drone, call for air support or direct ground fires to a specific target. A collective AI system can gather, pool and analyze input from a squad of soldiers at one time, comparing responses to one another to paint an overall, wholistic combat scenario picture.

“With opportunistic sensing, we can identify where those humvees are. Now I know dynamically where the threat objects are for the mission. This group of individuals has given me that information without them having to radio back. Information is automatically extracted by soldiers doing their normal behavior,” John Touryan, Researcher, Cognitive Neural Sciences, Army Research Lab, told The National Interest in an interview.

AI-empowered Machine Learning can factor prominently here, meaning the computer analytics process can identify patterns and other interwoven variables to accurately forecast where other Humvees might be based on gathered information. Such a technology might then accurately direct soldiers to areas of great tactical significance.

Touryan explained it this way, saying that an AI system could, in effect, say “this group of soldiers is very interested in humvees and vehicles so let me analyze the rest of the environment and find out where those are, so that when they come around the corner they are not going to be surprised that there is a Humvee right there.”

By drawing upon an integrated database of historical factors, previous combat and known threat objects, the AI-generated computer system could even alert soldiers about threats they may not be seeing. The computer could, as Touryan put it, find “blind spots.”

“What we hope is that within this framework, AI will understand the human and not just be rigid. We want it to understand how soldiers are reacting to the world,” Lane explained.