How the U.S. Marines Plan to Fight (And Win) the Next Big War 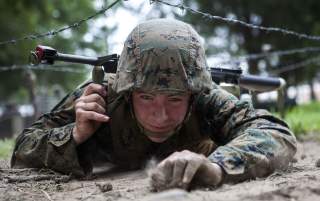 In an era of great power conflict, U.S. amphibious warfare forces are the Nation’s first line of defense. But many senior military leaders, including the new Commandant of the Marine Corps, General David Berger, believe that large-scale, multi-brigade opposed landing operations of the kind conducted in the last century are no longer possible due to the proliferation of anti-access/area denial (A2/AD) systems. As a result, the Marine Corps is reconsidering both the size and composition of its amphibious warfare fleet. Before the Navy and Marine Corps make irrevocable decisions regarding force structure and critical enablers that could weaken the Nation’s premier 911 capability, they need to consider the full range of missions amphibious warfare forces can perform. There is an argument for more, not fewer, amphibious warfare ships and for the acceleration of acquisition of the most modern of these vessels.

In his Commandant’s Planning Guidance, General Berger argues that the ability to conduct major joint forcible entry operations is challenged by the proliferation of A2/AD capabilities and the ability of long-range precision weapons to target concentrations of large sea-going platforms. As a consequence, the Commandant has decided to change the force sizing construct for the U.S. fleet of amphibious warfare ships:

"We will no longer use a ‘2.0 MEB requirement' as the foundation for our arguments regarding amphibious shipbuilding, to determine the requisite capacity of vehicles or other capabilities, or as pertains to the Maritime Prepositioning Force. We will no longer reference the 38-ship requirement memo from 2009, or the 2016 Force Structure Assessment, as the basis for our arguments and force structure justifications.”

The U.S. Marine Corps wants to completely rewrite the playbook when it comes to amphibious warfare. It seeks to counter the growing A2/AD threat by proliferating platforms and increasing reliance on long-range fires and unmanned systems to penetrate enemy defenses. Marine landing forces will employ a combination of extremely sophisticated air capabilities, centered on the F-35B and MV-22 and fast-moving ground units equipped with new platforms, like the Amphibious Combat Vehicle, to conduct long-range, mobile operations. As General Berger described his vision: “We need a force capable of denying freedom of naval maneuver to deter our adversaries; or, as necessary, a Corps capable of exploiting, penetrating, and degrading advanced adversary defenses in all domains in support of Naval and Joint Force operations.”

Unfortunately, the Navy and Marine Corps are in danger of throwing the baby out with the bathwater. There is a clear requirement to address the demand for high-end conflicts with great power competitors. But to dismiss the utility of major landing operations is to ignore both the realities of operations in the Indo-Pacific region and the history of the last two centuries. Simply put, in the event of a major conflict in this region, the Navy and Marine Corps will inevitably be required to seize, control, and operate from land locations.

A future conflict based on distributed capabilities employing long-range fires, advanced air platforms, swarms of unmanned vehicles under, on and above the seas and fast-moving land units will need command and control, intelligence and logistics capabilities. These can only be provided by amphibious warfare ships designed with these requirements in mind.   So-called low-value platforms, almost by definition, will lack many of the capabilities the Marine Corps will need to participate in an ocean-spanning, high-intensity fight.

Basing a future force design for the amphibious warfare fleet on the demands of the high-end fight alone ignores the reality that most operations by the Sea Services will take place under conditions short of war. Just last week, the Boxer Amphibious Ready Group (ARG), with the embarked 11th Marine Expeditionary Unit (MEU), was operating near the Straits of Hormuz when the lead ship, the assault ship Boxer, downed one or two Iranian drones using electronic jamming.  The ARG/MEU has the breadth of capabilities to counter any Iranian attempts at intimidation.

Amphibious warfare ships are in continuous service around the world, providing the Combatant Commands with unique capabilities. In recent years, in addition to providing deterrence of adversaries and reassurance to allies, these vessels have conducted a wide range of missions including maritime oil disaster response, small craft raiding, airborne mine countermeasures, spacecraft recovery, intelligence gathering, counter-piracy, maritime interdiction, and humanitarian assistance. Even in a world dominated by great power competitions, the demand for these services will not diminish.

Regardless of the issue of overall fleet size, the amphibious warfare fleet is in serious need of modernization. The current size of the fleet, 31 ships, means that at any one time there are around 18 available for operations.  This number is inadequate to meet current demands, much less respond to a high-end contingency.

In addition, there is a clear need for more capable ships. With the arrival of the F-35B, airpower is becoming ever more critical in future Marine Corps operations. But to take advantage of what the F-35B offers, means building more large-deck amphibs, particularly the new America-class amphibious assault ships (LHA).

When the full range of evolving threats and missions is considered, it may turn out that the size of the future amphibious warfare fleet should be larger than the prior goal of 38 ships.  But whatever number the Sea Services finally settle on, they must be the most capable ships available.  This means increasing, not decreasing, the procurement of America-class LHAs and the new LPD-17 Flight II.