This Is How the U.S. Navy Hunts Nuclear-Armed Chinese Submarines 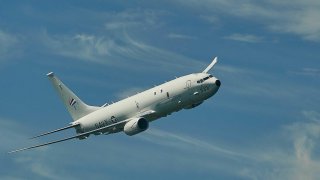 The Navy has been moving quickly to increase its fleet of Poseidon’s on an accelerated timetable; in the Navy’s 2020 budget, the service was authorized for a near term increase in Poseidon production by three, moving funding for the year up for nine Poseidons, as cited in a report from USNI news. Last year, the Navy awarded Boeing a $2.4 billion deal to produce 19 more P-8A Poseidon surveillance and attack planes. The Poseidon increase appears to align with the service’s overall Pacific theater strategy, which makes a point to sustain peaceful, yet vital surveillance and Freedom of Navigation missions in the region.

Seeking to overcome the Pacific’s “tyranny of distance” dispersed geography, and track China’s expanding fleet of submarines, the Navy is working with Congress to accelerate and delivery more Virginia-class submarines per year, moving beyond previous plans. The Navy has also been moving to place its new Triton sea drones in Guam.

“We’ve been flying in and around the South China Sea for really about the past 15 years, and I would probably tell you we’ve done some as recently as this week,” Brown told reporters on Dec. 6, according to the Asia Times article.

As part of these missions, Brown specifically cited Poseidon aircraft as well as PQ-4 Global Hawks and U-2 Dragon Lady reconnaissance planes.

In 2018, Captain James Fanell, a former director of intelligence and information operations for the U.S. Pacific Fleet, warned Congress about the need to track and deter Chinese nuclear-armed submarines.

Currently in service with UK, Norwegian, Indian and Australian militaries, among others, the Poseidon is increasingly in demand in the international market.

Kris Osborn previously served at the Pentagon as a Highly Qualified Expert with the Office of the Assistant Secretary of the Army - Acquisition, Logistics& Technology. Osborn has also worked as an anchor and on-air military specialist at national TV networks. He also has a Masters Degree in Comparative Literature from Columbia University.

This article first appeared in Warrior Maven on January 9, 2020.