How the U.S. Navy Took a Battlecruiser and Made It Into an Aircraft Carrier 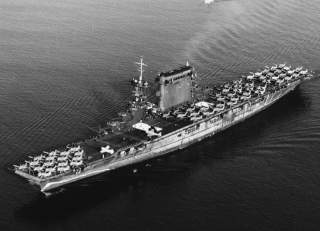 Although the Washington Naval Treaty put a stop to the battlecruiser program, it did permit both Japan and the United States to convert two of their battlecruisers, then under construction, into aircraft carriers.

In its more than two-century history, the United States Navy has frequently taken ships designed and built for one purpose and rebuilt and rearmed them for an entirely different mission. A brief historical review of what was done and why leads to a discussion of what repurposing possibilities exist in the 21st century.

In 1814, the United States Navy launched Independence, its first ship-of-the-line. A powerful warship, she had three gun decks and carried a heavy armament of eighty-seven cannons, firing 32-pound cannonballs. Unfortunately, Independence had a significant flaw. She rode so deep in the water that the gun ports on her lower gun deck were less than four feet above the waterline. Unless sailing in calm seas, the ship dared not open the gun ports on her lower gun deck for fear of flooding. Consequently, in most sea conditions, Independence could not employ a third of her armament.

The Navy endured Independence’s limitation for two decades. In 1835 the ship was ‘razeed.’ No longer a ship-of-the-line, recommissioned in 1836 as a 54 gun frigate, the Independence had lost her upper gun deck and, so, had just two gun decks. With all of her weaponry usable in all sea conditions, Independence became an instant success. Exceptionally fast, more heavily armed than other frigates, she served as a warship until steam replaced sail. Then, as an auxiliary, the Independencesoldiered on until 1913. Not too shabby for a ship initially deemed a ‘failure.’

Sometimes diplomacy forces the repurposing of warships. In 1916, the United States Navy ordered the Lexington-class battlecruisers. However, the First World War and its need for smaller warships and cargo ships intervened, and actual construction of the lead ship, the Lexington, did not begin until 1920. By 1922, with memories of ‘the war to end wars’ still fresh, public pressure caused the United States government to initiate the Washington Naval Conference. An arms limitation success, the 1922 Washington Naval Treaty drastically limited the size of each signatory’s battle fleet, allowing Britain, Japan, and the United States to finish building only two new battleships each, before banning all new battleship construction.

Although the Washington Naval Treaty put a stop to the battlecruiser program, it did permit both Japan and the United States to convert two of their battlecruisers, then under construction, into aircraft carriers. The redesign process, constrained by the already completed construction, nonetheless produced, for both countries, two useful–if not optimal–ships. Although they had significant shortcomings, both of the American aircraft carriers, Lexington (CV-2) and her sister, Saratoga (CV-3), played critical roles in the early battles of World War II’s Pacific conflict.

A pre-World War II planning miscalculations led to an emergency warship repurposing. In December 1934, Japan announced that she would no longer abide by the 1926 London Naval Treaty. Consequently, in 1936, both Japan and Great Britain initiated balanced construction programs of roughly equal numbers of battleships and aircraft carriers. The United States took a different approach, ordering, over the next four years, eight battleships and a single aircraft carrier.

In the spring of 1940, reacting to the Allied debacle in France, Congress passed the Two-Ocean Navy Act (Vinson-Walsh Act) that authorized the construction of eleven large fleet aircraft carriers and an additional nine battleships. In the fall of 1941, with the Essex-class carriers scheduled for delivery in 1944, President Roosevelt realized that the United States would likely enter the Second World War without the necessary aircraft carriers. He approached the Navy’s General Board, staffed with senior admirals, and asked if some of the cruisers, then being built, might be altered into light fleet carriers. The General Board recommended against the idea.

After the Pearl Harbor disaster, the Navy’s reluctance to repurposing cruisers into light aircraft carriers vanished. In all, nine Cleveland-class light cruisers and two Baltimore-class heavy cruisers became carriers. As the General Board had predicted, the small carriers were cramped and a challenge when landing aircraft. However, the ships did successfully serve alongside the Essex-class carriers in the fast carrier task forces. Again another case of repurposed warships meeting a pressing need.

Technology advances can result in the repurposing of warships. In the 1950s, with the advent of jet-powered military aircraft, anti-aircraft artillery became increasingly ineffective. The Navy realized that the future lay with ship-borne anti-aircraft missiles. As designers increased their range, the missiles of the era grew in size and weight and, as a consequence, they required sizable ships to serve as their launch platform.

Leftover from World War II, the Navy had numerous mothballed light and heavy cruisers. In total, the Navy had eleven of these ships, conforming to four distinct designs, rebuilt. Given the hull classification CG and known as guided missile cruisers, six of the ships, the Albany and Galveston-class conversions, employed the long-range Talos missiles, while five others, the Boston and Providence-class ships, carried only the mid-range Terrier. An interim solution to the fleet’s anti-aircraft defense needs, these missile cruisers served from the 1950s into the 1970s.

In the 21st century, because the 1991 START Treaty limited the United States to fourteen ballistic missile submarines (SSBN), the Navy had to decommission four Ohio-class SSBNs. Rather than scrap these relatively new, expensive vessels, the Navy converted each into a guided missile submarine (SSGN) carrying a maximum of 154 Tomahawk cruise missiles.

By the end of the 2020s, with the advent of the Columbia-class SSBNs, the Navy will need to dispose of the remaining Ohio-class SSBNs. As an alternative to scrapping, the United States could convert surplus Ohio-class SSBNs into SSGNs. While certainly doable, the practicality of such conversions would depend upon the world’s political situation, each boat’s condition, and the threat environment likely to be faced.

Other possible 21st-century repurposing possibilities exist. By the fourth decade of this century, the Navy will have commissioned four Ford-class and ten Nimitz-class aircraft carriers. Unless the world situation deteriorates badly, the Navy cannot afford to operate fourteen 100,000 ton carriers simultaneously. The current thinking would have the Navy replace the oldest serving Nimitz-class ship with the newest Ford-class carrier upon its commissioning.

Alternatively, since the Nimitz-class carriers have large flight decks and hangars plus accommodations for thousands of personnel, the Navy could repurpose these vessels into amphibious assault ships (LHA). Much larger and faster than an America-class LHA, a repurposed, nuclear powered Nimitz would carry, when compared to current or planned amphibious assault ships, more Marines and more of that Service’s types of aircraft (F-35B, CH-53, and MV-22). From a budgetary perspective, the Navy would realize savings from not having to build new amphibious assault ships, and the Marine Corps would have use of the ultimate LHA.

Such a CVN to LHA repurposing must address the age problem. The first candidate, the Nimitz(CVN-68), commissioned in 1975, will, by 2026, have served 51 years. Does that fact, a priori, disqualify the vessel for repurposing as an amphibious assault ship? Perhaps not when one considers the complex systems that have already seen lengthy and strenuous usage, such as the C-5M, B-52H, KC-135, A-10C, M1 tank, and M109 self-propelled howitzer. Each of these long-lived systems has already or soon will serve decades beyond their fiftieth anniversary.

The behind schedule, over-budget, and seldom deployed littoral combat ships (LCS) have endured seemingly endless critical press. Additionally, these ships’ intended theater of operations, littoral combat, also appears to be practically non-existent. These difficulties raise the question: What to do with the 35 LCS ships?

Two suggestions: First, consider repurposing the LCSs into missile carriers by removing their helicopters and converting their flight decks and hangars into spaces for vertical launch tubes. Instead of installing fully capable radars and their attendant fire control systems, designers should opt for a network solution that would allow either a guided-missile cruiser or destroyer to control the launching and targeting of the converted LCS's air defense or surface attack missiles. Such an LCS to missile carrier conversion would materially increase the number of missiles available to the fleet.

The second repurposing suggestion assumes that one or more of the directed energy weapons (DEW) development programs will yield an effective laser, railgun, or hyper-velocity projectile as the basis for an anti-missile weapon system. To accommodate these DEW systems, an LCS would have its complement of helicopters removed, and its hangar converted into space for the DEW's electric generators. Mounted on what was formerly the flight deck, the actual DEWs would have largely unrestricted fields of fire. When deployed, these DEW carriers would protect high-value fleet assets, such as aircraft carriers and amphibious ships, against incoming hostile missiles as part of a close-in defense system.

The repurposing of warships throughout the Navy’s history has assisted the service to meet its needs and correct its mistakes in a practical, if not optimal, way. In the near future, the Navy should once again consider using repurposed warships to achieve its mission.