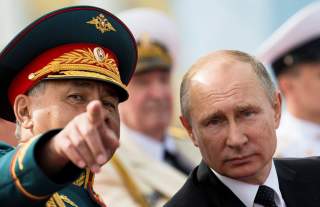 Key point: Despite some accusations, the evidence looks like Moscow is probably not doing secret nuclear tests. If Moscow was, it would be in violation of a treaty.

A senior U.S. intelligence official on May 29, 2019 accused Russia of secretly conducting nuclear tests in violation of an international treaty and the country’s own moratorium on such tests.

But there’s no hard evidence of these alleged tests, one arms-control group pointed out.

But the Arms Control Association in Washington, D.C. for one is skeptical of Ashley’s claim. “Ashley would only say that Russia had the ‘capability’ to conduct very low-yield supercritical nuclear tests in contravention of the treaty, a capability which Russia, China and the United States have long had. He did not say that Russia has conducted or is conducting such tests.”

No public evidence has ever been provided to support the claim of illegal Russian testing and Gen. Ashley didn’t provide any Wednesday.

Former Undersecretary of States for Arms Control and International Security Rose Gottemoeller told the House Armed Services Committee in December 2015 that “within this century, the only state that has tested nuclear weapons ... in a way that produced a nuclear yield is North Korea.”

This begs the question of what, if anything, has changed since then that would support a different conclusion.

Republicans in Congress likewise have accused Russia of taking advantage of the 1992 Open Skies Treaty, which allows Russia, the United States and other countries to fly camera-equipped surveillance planes over each other’s territory in order to verify adherence to arms-control accords.

Again, there’s no hard proof that Russia has violated the treaty. But that isn’t stopping Ashley from undermining the accord. Ashley claimed that Russia has “not affirmed the language of zero-yield,” which would guarantee no nuclear explosions in tests.

For example, Russian Deputy Foreign Minister Sergey Ryabkov noted in a 2017 op-ed that the treaty “prohibits ‘any nuclear weapon test explosion or any other nuclear explosion,’ anywhere on Earth, whatever the yield.”

The most effective way for the United States to enforce compliance with the zero-yield standard is for the Trump administration and the U.S. Senate to support ratification of the treaty and help to bring it into force, which would allow for intrusive, short-notice, on-site inspections to detect and deter any possible cheating.

In the meantime, if the U.S. has credible evidence that Russia is violating its CTBT commitments, it should propose, as allowed for in Articles V and VI of the treaty, mutual confidence building visits to the respective U.S. and Russian test sites by technical experts to address concerns about compliance.