How Will America Replace the 844 F-35 Parts That Turkey Makes? 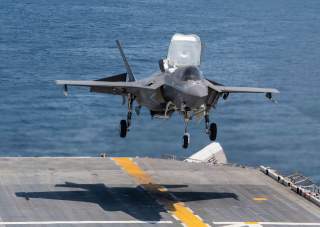 “I am doing appropriate acquisition supply chain risk management, like I do everywhere. And so, I’m not doing anything special” with regard to Turkey, Winter said.

This will add a fifth “mission thread” to the four missions, which are: air superiority, suppression and destruction of enemy air defenses, close air support, and strategic attack of key targets.

The Block 3F version can do limited strikes against ships, but Winter explained the radar and other sensor functions needed to attack land targets are different for attack of sea targets. The update in Block IV will allow the F-35 to be effective in the sea strike role as well, he said.

The Navy/Air Force Long-Range Anti-Ship Missile (LRASM), a variant of the AGM-158 JASSM-ER, is not a fundamental element of the new mission capability, Winter said. Although the F-35 has had fit checks of LRASM externally and can probably carry the weapon internally, the Navy’s threshold munition for the mission is the AGM-154 Joint Stand-Off Weapon, or JSOW, he said, noting that LRASM may be added later.

The Joint Program Office also has endorsed keeping Turkey as an F-35 partner despite concerns about that country buying a Russian-made missile defense system, Winter said. He also confirmed Japan’s expanded order for F-35s and said the Navy is on track to be operational with the C model of the fighter in two months.

Winter said the Joint Program Office was tasked to provide a judgement on the potential effects of Turkey being expelled from the F-35 program. Turkey, one of the original partners on the program, has come under criticism for human rights violations and its plan to buy the Russian S400 air defense system.

Congress has expressed the fear that F-35s operating in close proximity to the S400 could give Russian technicians crucial insights into spotting and tracking the stealthy F-35.

“We supported the department’s report in November that provided our concerns and the impact of the current Turkey-US relationship,” Winter said. The program’s “industrial base evaluation” of the effects of ousting Turkey—which produces parts for the F-35, is standing up an engine depot, and will buy 100 of the jets—would be a drag on the program, and Turkey should be retained in the consortium if possible, Winter asserted.

“The facts are that Turkey produces 844 parts for me, and they are quality parts, affordable parts, and delivered on time,” he said. “Turkey ‘s industrial establishment for F-35 is one of my best partners, and they do great work.” His “official line” is that Turkey remain “a committed partner, and we are continuing to execute the program of record, with Turkey participation, in providing their aircraft, establishing their footprint, and preparing for their arrival of aircraft in-country next November.”

Winter noted, though, that his office is continuously exploring work-arounds that can be put in place if any partner drops out or suffers severe production issues that might imperil the program, which sources parts and materials from all its partner countries.

“I am doing appropriate acquisition supply chain risk management, like I do everywhere. And so, I’m not doing anything special” with regard to Turkey, Winter said.

Winter confirmed that Japan has just added 105 F-35s to its existing order for 42 of the fighters, and that this expanded buy would include a mix of both F-35A conventional takeoff models and F-35B short takeoff/vertical landing types, for “a total of 147 F-35s,” he said.