This Is How The World's Most Brutal Dictatorship Is Fighting Coronavirus 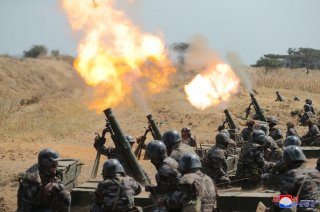 Here's What You Need To Know: North Korea was the first country to close its borders when the COVID-19 appeared in neighboring China. Since January 22, it has blocked the entry of Chinese tourists and placed in quarantine for thirty days for anyone entering the country.

On March 21, 2020, Pyongyang fired two short range missiles towards the Sea of Japan. According to the South Korean army, the two missiles were launched from North Pyongan province in the west of the country. Seoul deemed the launches as “extremely unwelcoming given the plight the world faces as a result of COVID-19.” However, to this date, North Korea has not officially reported any contamination from the virus on its soil.

North Korea has increased its arms testing since November 2019 in the absence of progress in the negotiations with the United States. During those talks, Washington had hoped to convince North Korean leader Kim Jong-un to abandon its nuclear program. Analysts have noted that Pyongyang is gradually refining its capabilities, despite sanctions and condemnations. For instance, their recent missile tests were fired from the port city of Wonsan, flying about 140 miles to the northeast before landing in the waters between North Korea and Japan. However, Ankit Panda from the Federation of American Scientists, an NGO scrutinizing the risks linked to nuclear power, indicated on Twitter that he expected more details from the North Korean news agency KCNA on the type of weapon tested. (During other previous tests, KCNA has usually made a detailed statement the day after the tests are conducted.) Meanwhile, the Korean peninsula has experienced remarkable relaxation of sanctions, since the historic meetings between Kim and U.S. President Donald Trump in 2018. However, negotiations on a possible denuclearization deal have stalled since the second summit between the two leaders at Hanoi in February 2019. So with this background in mind, how is Pyongyang handling the global coronavirus pandemic?

Thousands of people, including foreign nationals, have been placed in quarantine as North Korea has closed its borders. When the official quarantine period came to an end, 221 foreigners were offered a choice: these diplomats and aid workers could stay in Pyongyang or take a flight to Vladivostok. On March 9, 2020, flight KOR271 of Air Koryo, landed in Vladivostok with a hundred diplomats on board. This group of diplomats, consisting of forty North Korean diplomats and sixty-three foreigners was the first to leave the hermit kingdom since the start of the COVID-19 pandemic. The group consists of German, Russian, French, Swiss, Polish, Romanian, Mongolian, Egyptian and Russian diplomats. Reports indicated that this flight was organized by the North Korean government, but its drop-off point shows that there was also likely dialogue with the Russian government. For instance, the plane has already returned to Pyongyang filled with Russian medical supplies.

Additionally, North Korean media have launched a major communication campaign to remind the population of good hygiene measures with images coming out of Pyongyang showing North Koreans “all” wearing surgical masks. Rodong Sinmun, the official newspaper of the Korean Workers Party (KWP), and KCNA have released photos of Kim supervising shelter operations. He is always wearing a black ouchanka but never wears a mask, unlike the soldiers around him. The DPRK tightly controls the image of its leader and North Korean political experts agree that this absence of a mask in public space is anything but fortuitous. Koh Yu-hwan, a professor of North Korean studies at Dongguk University in South Korea believes that showing Mr. Kim with a mask “would be harmful to his charisma, because it would give the impression that he is afraid of catching the virus.”

As mentioned, officially North Korea states it is not affected by the COVID-19 crisis. But, according to the Rodong Sinmun, 7500 people have been treated since the end of February for symptoms such as hypertension and respiratory failure, in the province of North Pyongan, close to the Chinese border. Furthermore, 2,420 in South Pyongan and 1500 in Kangwon were tested as well. The NK Daily website, based in Seoul, stated on March 9 that 180 soldiers died of the disease in January and February, based on a North Korean army health services report to its general staff. The deceased soldiers came from regiments stationed on the Chinese border where 3700 soldiers were reportedly placed in quarantine.  On March 19, 2500 people were released from quarantine in North and South Pyongan and, on March 20, the Rodong Sinmun reported the death of three other soldiers. No matter how accurate these numbers are, what is certain is that North Korea’s economy will be severely affected. About only 40 percent of their population has secure access to food, but for the rest, the restriction of trade and movement risks causing starvation.

According to the World Health Organization (WHO), in 2016 North Korea had thirty-seven doctors per 10,000 inhabitants. Sure, the infant mortality rate (15.1 per thousand) and life expectancy (71.7 years) are better than those of countries like India or Tanzania. But in the 2019 Global Health Security Index, compiled by a research center at Johns Hopkins University, North Korea ranked 193 out of 195 countries—only ahead of Somalia and Equatorial Guinea. In the face of these problems, Pyongyang has historically resorted to the method of national isolation in the face of health threats. For example, the country banned tourist visits for more than four months in 2014 to protect itself from the Ebola virus and it blocked all travel for six months during the SARS epidemic, which in 2002-2003 killed nearly 650 people in mainland China and Hong Kong.

The fight against this COVID-19 pandemic works effectively in an authoritarian state only where authorities are remarkably good at sanitary control and can easily apply systematic and effective quarantine measures, cutting off the areas where the pandemic of coronavirus has appeared. The situation remains fragile as North Korea is seeking aid from Russia. North Korea knows that the resources of its health system are limited, in particular because of international sanctions imposed due to its nuclear and missile development programs. Pyongyang has not made a formal request for aid, but since the start of the pandemic, the United Nations has granted six month waivers to various organizations such as the WHO or the Red Cross for the dispatch of equipment, thermometers, resuscitators or surgical masks, and other supplies. Some of this material has arrived at the Chinese border and is waiting to be imported.

On March 21, the KCNA agency released a press release from Kim Yo-jong—a member of the central committee and sister of the North Korean leader—in which it welcomed Trump’s letter to Kim. President Trump said “he intends to cooperate in the fight against the pandemic, saying he is impressed with the President’s efforts to defend his people from the serious health threat.” That letter, sent sent before the missile tests on Saturday, was interpreted by observers as a call from Washington to resume dialogue.

North Korea was the first country to close its borders when the COVID-19 appeared in neighboring China. Since January 22, it has blocked the entry of Chinese tourists and placed in quarantine for thirty days for anyone entering the country. However, it remains unclear whether the border is completely sealed. On March 13, the official KCNA agency reported that as part “of ultra-strong preventive measures,” all imported goods were quarantined for ten days and schools have been closed.

Since the beginning of the pandemic, the North Korean media have regularly propagated hygiene measures, illustrated with photos of individuals in special suits and masks. During events—such as the artillery launch that took place on March 13—Pyongyang’s leaders and senior military officers wore masks, with the notable exception of Kim. On March 18, the North Korean leader inaugurated the beginning construction of a new hospital in Pyongyang. On March 22, Rodong Sinmun called for keeping “a distance of at least one meter from the others and [to] not let children outside, especially in public and crowded places.” Knowing that there are 9583 cases in South Korea, it is very likely that North Korea is also affected by the COVID-19 pandemic and is trying to get a handle on it.

Patricia Schouker is an energy and security analyst based in Washington D.C. She is a Non-Resident Fellow at the Payne Institute Colorado School of Mines and an Associate Member of New College, Oxford University.  Twitter: @Patricia_Energy  This article first appeared last month.