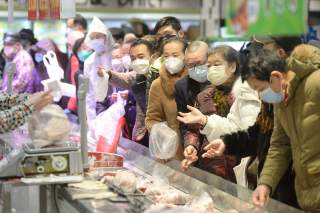 The emerging coronavirus epidemic has placed Wuhan at the epicentre of the crisis. The city, along with an area containing 50 million people, is currently under an anti-epidemic lock-down, a hybrid measure between quarantine and sanitary cordon.

Unlike the recent cases of avian influenza in Hong Kong in 2011 and Shanghai in 2013, controlled by massive poultry killing, this crisis is not happening on the borders of the Chinese territory, but in its very centre. In the context of the neo-Confucianist ideology which places China at the centre of the world or tianxia – “everything under heaven” – strong crisis management in Wuhan will test the capacity of the Chinese government to prepare adequately for pandemic.

The position of Wuhan in the recent history of China needs to be analysed in order to understand the mobilisation of Chinese and international authorities in the early response to the new coronavirus, as the rest of the world watches.

Since Wuhan was the starting point of the 1911 Chinese “revolution” – which is called in Chinese geming a term which means both “revolution” and “change of heavenly mandate” – the Xi Jinping government is attentive to the signs that this epidemic raises for the good government of China.

Wuhan is an 11 million people metropolis and the capital of Hubei Province. It was created in 1927 when the cities of Wuchang, Hankou and Hanyang merged into one. These three important trading posts were based on the confluence of the Yangzi and Han Rivers. They developed during the 19th century when western investors settled in the area under the conditions of the “unequal treaties” signed in the 1860s by Prince Gong and Emperor Xianfeng.

The Chinese Revolution, which brought down the Qing Empire, started in 1911 when soldiers in Wuchang protested against the transfer of the funding of railway construction to foreign banks, leading to the declaration of the Chinese Republic by Sun-Yat Sen in Nanjing, which then replaced Beijing as the capital city of the country.

Wuhan has been an epicentre of various crises for decades. In 1931, a disastrous flood killed more than 2 million people. It was an event that the historian Chris Courtney qualified as “perhaps the most lethal flood in history” which, he writes, “exacerbated social divisions and became a health and humanitarian crisis”.

Only few years later, in 1937-1945, Wuhan served along with Chongqing, as the capital city of the Guomingdang government during the Sino-Japanese War, and as such was heavily bombed.

After 1949, Mao Zedong made Wuhan one of the industrial centres of the People’s Republic, particularly for steel, electricity and chemicals. Under his government, over ten universities for scientific research were built. Several important meetings of the Communist Party were held on the shores of Wuhan’s lake, underlining the political importance of the city.

Under the “four modernisations” period launched by Deng Xiaoping after Mao’s death in 1976, Wuhan became a centre for high technologies such as fibre optics and the car industry.

An expertise on deadly viruses

Over the past ten years, Wuhan has been increasingly connected to the rest of China and the world through the construction of infrastructures for high-speed trains and international flights.

Wuhan is also the city where the Chinese Academy of Sciences, with the help of French experts – particularly the Pasteur Institute – opened the only P4 lab in Asia in January 2018. AP4 lab is a laboratory where the level of biosecurity measures (number 4) allows biologists to manipulate highly dangerous viruses such as Ebola, SARS or H5N1.

This has led to conspiracy theories circulating on the web, speculating that the new coronavirus was released from this lab or was even created by the lab to obtain more funding.

In reality, Wuhan has been massively equipped by the Chinese government to anticipate new viruses emerging from animals in big cities since 2003, when the SRAS pandemic broke out. France developed a similar P4 lab in Lyon in the same period.

A test for Xi

Xi Jinping is well aware that the way his government manages the coronavirus in Wuhan, cradle of the Chinese Revolution in 1911, may heavily affect his authority.

His politics in Hong Kong and Xinjiang, where student demonstrations and Uighur minorities were crushed down, have been globally criticised. The context of African Swine Fever, which killed half of the pig population and doubled the price of pork, along with financial tensions over the convertibility of the yuan to the dollar, have destabilised the Chinese economy more than the commercial war with Donald Trump’s administration.

Similarly, in 2003, the SARS crisis emerged amid a sensitive political climate in the period of transition between Jiang Zemin and Hu Jintao. The epidemic contributed to the fragility of the Chinese state, as it was criticised by the World Health Organisation for not reporting cases.

In 2020, this new coronavirus will now test the capacity of Xi, who in 2018 obtained the right to extend his mandate indefinitely, to remain in power.

The centrality of Wuhan on the geopolitics of China thus leads Chinese and international experts to focus on the metropolis as a point of emergence and outbreak, both in reporting about the virus and in locking down the population.

So far, it seems, the population has accepted the lock-down measures, but before they were implemented, 5 million people had already left the city to join their families for the Chinese New Year. This has raised major concerns in the social media and in public health authorities.

While most cases have been concentrated in Wuhan and its area, the virus has spread to major cities connected to Wuhan and to foreign countries such as France, where three French-Chinese nationals returning from Wuhan presented with coronavirus symptoms.

What happens in Wuhan has become an indicator of what will happen in the rest of the world if the virus spreads for what is already a new pandemic – the new coronavirus being so far more contagious but less lethal than SARS.

This crisis will test the capacity of Wuhan as scientific hub as well as a political asset.

Will Wuhan become a sentinel post for pandemic preparedness? Will it follow the path of Hong Kong, which since the 1970s has been a leading actor in public health and sanitation crises, and proved its efficiency during the avian influenza outbreaks? Hong Kong’s city experts have developed models to project how the epidemic can progress. On the other hand, in Wuhan, local authorities are under tight scrutiny. Xi himself has criticised their slowness in reporting the first cases of infection.

Rather than a new crisis between China and the rest of the world, as it was the case with SARS in 2003, the new coronavirus may highlight the heavy social and political tensions lying low between Chinese cities.

We may observe now a fierce competition between different cities such as Wuhan, Hong Kong and Shanghai under the surveillance of Beijing. As they raise the alarm about the environmental crises affecting China – triggered by the massive development of the Chinese economy over the last 50 years – these cities may enter a political crisis, illustrating the paradox of the neo-liberal authoritarian government of Xi on “everything under heaven”.