Humanity Would Be Better off Saving Earth, Rather Than Colonizing Mars 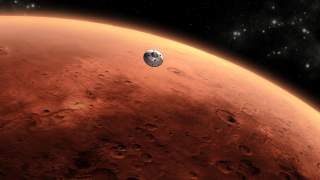 Recently, SpaceX held a top-secret “Mars Workshop” in Boulder, Colorado, to discuss what it would take to colonize Mars. Although the deliberations of the workshop were kept quiet, in the past SpaceX founder Elon Musk and other prominent figures, including renowned physicist Stephen Hawking, have stressed the importance of establishing a sustainable outpost of human civilization on the Red Planet. “If there’s a third world war we want to make sure there’s enough of a seed of human civilization somewhere else to bring it back and shorten the length of the dark ages,” according to Musk. Hawking believes that “[w]ith climate change, overdue asteroid strikes, epidemics and population growth, our own planet is increasingly precarious,” and that we must colonize a new planet in the next 100 years. “The Call of Mars” by Astronaut Buzz Aldrin advocates for a “comprehensive plan that would lead to permanent human settlement on Mars in the next 25 years.” Tim Urban, the writer behind the long-form blog Wait But Why, sums up the situation with the following metaphor: “[a]ll of our eggs are on one planet, let’s get life insurance for the species.”

The mission to colonize Mars runs into three major challenges. First, likening a colony on Mars to life insurance is misleading. If the earth does overheat to the point that we all fry or becomes so polluted that we all choke, there will be no way to move the world’s population to Mars. Not even one child per family. Rather, the idea is that the survival of the human species will be ensured; the select few that go to Mars will survive, procreate, and gradually build a new population. Elon Musk’s most optimistic estimate is that SpaceX will transport one million people to Mars in the next 100 years. The proper analogy is to the United States' Cold War plan for nuclear warfare—to rush a few thousand "special" people to bunkers, leaving most of humanity to be nuked.

Second, if the colonization of Mars moves beyond the subject of workshops and cocktail party chit-chat into a major project, it brings with it an unavoidable subtext of despair. Despite the fact that what Musk, Hawking, and others propose it as a backup plan, it suggests that we may well fail to save Mother Earth and that it is time to search for another planetary home, to save the species, even if not mankind. But what the droughts, the fires, the hot summers, and the melting glaciers call for is not an escape from Earth, but a redoubling of the efforts to save it. Some hold that the next decade is a critical period, as the window of opportunity to save the earth is rapidly narrowing. Others hold that we have more leeway. However, there is wide agreement that merely dialing down economic activity may be neither sufficient nor politically feasible. What is needed are major technological breakthroughs that will allow for protecting earth while sustaining a healthy level of economic activity. Developing artificial leaves, that can turn carbon dioxide into oxygen, and be mass-produced much more quickly than their natural counterparts, is a telling example. To make such breakthroughs we need major concentrations of research and development resources, talent, and leadership, all of which are in short supply. Hence, any serious Mars endeavor will inevitably cut into the drive to save Mother Earth.

Even Elon Musk admits that colonizing Mars will require “tremendous entrepreneurial resources.” Musk and his team estimate that just sending the first twelve astronauts to Mars will cost $10 billion per person. A rocket that could transport astronauts to Mars remains to be invented. Once the astronauts do arrive on Mars, they will be confronted with an extremely hostile environment. The water that has been discovered is buried one mile below the surface, the air is saturated with toxic chemicals called perchlorates, and the Mars atmosphere does little to protect from damaging cosmic radiation. Some hold the water could be made to yield oxygen for breathing and hydrogen for fuel. However, first one would have to bring a drill from earth, then pumps, then build a plant to process the water. The same holds for most everything else.

As Ellen Stofan, former chief scientist of NASA puts it, “There is no Planet B.” We object to the mission to colonize Mars. We believe that it is an incomplete solution to an unlikely contingency. The window of opportunity for us to work together to solve our planet’s most pressing problems is closing, and we must act before it is entirely shut.

Amitai Etzioni is a University Professor at The George Washington University and author, most recently, of Happiness is the Wrong Metric.

Eli Etzioni is a 2018 graduate of Claremont McKenna College.