A Hurricane Damaged This Air Force Base, but Now It's Getting a 5g-Powered Upgrade 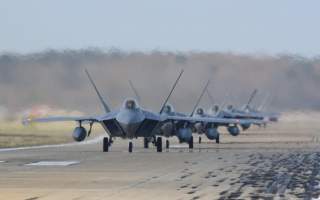 TYNDALL AIR FORCE BASE, Fla. – As Tyndall Air Force Base in Florida’s panhandle continues to rebuild after taking a direct hit from Hurricane Michael in 2018, it’s getting not only a makeover, but a 5G modernization, too. Defense Systems reports. Continue reading original article

23 Jan. 2020 -- The Air Force is working with AT&T to create a “smart base of the future,” including reconstructing and transforming the Tyndall ’s communications infrastructure with 5G-powered capabilities. Although the base buildout is expected to take three to five years, AT&T will light up 5G in mid-2020, enabling Tyndall to start taking advantage of benefits such as support for augmented and virtual reality (AR and VR).

“The Department of Defense really stands at the cusp of some of the most revolutionary changes in the market that they’re leading, and I think they’re game-changing,” said Mike Leff, vice president for defense at AT&T Global Public Sector. “The power of 5G has the potential to revolutionize and transform DOD operations, particularly on military bases, to significantly enhance mission readiness and enabling new mission capabilities like never before.”

One potential use case he pointed to is supporting flight-line operations massive amounts of data streaming to warfighters using data platforms, sensors and aircraft’ onboard systems so that crews on the ground and in the sky can more easily communicate.