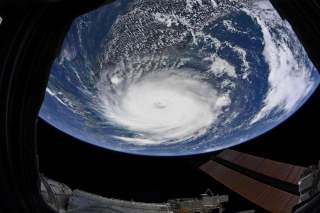 Hurricane Dorian is gaining speed as it nears the Florida coast, where it could make landfall as a Category 4 storm over the Labor Day weekend. And when Dorian does roar ashore, its impact could be massive.

The hurricane mostly avoided Puerto Rico and other vulnerable islands earlier this week, many of which are still recovering from deadly storms in years past. But parts of Florida and the Southeast have not fully recovered, including the Panhandle, which is still reeling from Hurricane Michael in 2018.

Vulnerable communities may be unable to evacuate, while toxic sites pose a safety hazard for humans and the environment alike.

As of Friday morning, the National Hurricane Center (NHC) said that Dorian was growing stronger with a path encircling all of Florida — other nearby states such as Georgia and South Carolina will also likely be hit.

Among the vulnerable cities is Miami, already dubbed “ground zero” for climate change. If the storm’s path holds, Dorian will make landfall slightly north of the city, around West Palm Beach.

“Every Florida resident should have seven days of supplies, including food, water and medicine, and should have a plan in case of disaster,” DeSantis advised earlier this week.

Exactly when Dorian will make landfall and what its impacts will be is unclear. But based on prior major hurricanes, there are a few things to look out for.

How destructive Dorian is could depend less on its wind speed and more on what happens when the storm reaches land. Climate scientists have found that warming waters are allowing storms to grow larger and wetter as they suck up more moisture while passing over the ocean. These types of storms typically stall after making landfall, unleashing a torrent of rain.

Those downpours can be devastating, especially in places already prone to flooding linked to sea level rise, like Miami. And rising seas mean that storm surges can move farther inland. According to NHC Director Ken Graham, “a Category 4 storm like this striking Florida could produce a storm surge of 10-foot or greater.”

If Dorian moves slowly, it will allow for more rain to fall, thereby increasing the likelihood of flooding. Rain estimates for Dorian vary, but some forecasts warn at least eight inches of rain, with up to two feet possible.

The United States has experienced several of these slow-moving storms in recent years. Hurricane Harvey, a Category 4 storm, deluged southeast Texas in 2017, killing dozens and causing around $200 billion in damage. Hurricane Florence, which hit the Carolinas and neighboring states in 2018, was only a Category 1, but the storm’s rains submerged the region, turning one town temporarily into an island.

Superfund Sites and Other Contamination

Florida has a number of sites on the Superfund National Priorities List, which singles out dangerously contaminated areas for cleanup by the U.S. government. When Superfund sites flood, toxic chemicals can spread, harming both human health and the environment.

Broward County, Florida, is home to one of the nation’s worst hazardous waste sites, where around 100,000 gallons of oil and pollutants are still sitting. That county could be deeply impacted by Dorian given the storm’s current path, leaving residents potentially exposed to dangerous toxins following the storm.

According to the Public Interest Network (PIRG), a nonpartisan coalition of organizations, another source of concern are coal ash ponds. Those are found in areas across the state and could pose a major health hazard if impacted by Dorian.

Disasters take a disproportionate toll on vulnerable groups. The elderly and disabled are often unable to evacuate, as are many low-income communities. Preparing for a hurricane is time-consuming and expensive to begin with and leaving is even more so. In the southern United States, which has a high poverty rate, individuals and families frequently stay and take their chances due to cost and accessibility issues.

Some people aren’t given the option to leave. Prisons are generally left to fend for themselves during hurricanes, even as incarcerated labor is often utilized for disaster preparation like filling sandbags. South Carolina infamously did not evacuate its prisons during Hurricane Florence.

DeSantis has said that state prisoners will be placed in fortified facilities but that private and federal prisons are not Florida’s responsibility.

Undocumented immigrants are also caught in limbo. As Hurricane Harvey approached Texas in 2017, immigration checkpoints briefly remained in force, prompting many residents to stay in place rather than risk scrutiny. And a year later, undocumented communities grappled over whether to evacuate from the North Carolina coast as Florence bore down.

Such a scenario could play out again in Florida, with dire implications for one especially vulnerable group: the state’s farmworkers.

Across the Southeast and Gulf Coast, many areas are still rebuilding after recent hurricanes in prior years. One of the most devastated regions is the Florida Panhandle, where Hurricane Michael wiped an entire town off the map last year.

In May, aid workers told ThinkProgress that the situation in the Panhandle was among the worst they had ever seen. Buildings largely remain destroyed, resources were running low, and residents continued to be worried for their future.

Some models show Dorian veering towards the Gulf of Mexico, a path that would put the storm into direct contact with the Panhandle. Florida State Emergency Director Jared Moskowitz has called that the “worst-case scenario,” one that could bring further crisis upon an already-devastated region.

The Panhandle isn’t alone. Hurricane Irma in 2017 caused heavy flooding and rainfall in much of eastern Florida. As of 2019, many communities in the state are still recovering from the storm, including those who lost their homes to the hurricane.

President Donald Trump’s administration made the decision this year to divert hundreds of millions of dollars worth of funds from the Federal Emergency Management Agency (FEMA) to boost border security programs. But the president may regret that choice.

Mar-a-lago, a resort and historic landmark owned by Trump, is located in Palm Beach,  a short distance from West Palm Beach, where Dorian could make landfall.

E.A. (Ev) Crunden covers climate policy and environmental issues at ThinkProgress. Originally from Texas, Ev has reported from many parts of the country and previously covered world issues for Muftah Magazine, with an emphasis on South Asia and Eastern Europe. Reach them at: [email protected].

This story was originally published by ThinkProgress.