Hurricane Ida Has the Potential for Huge Effect on Gasoline Supply 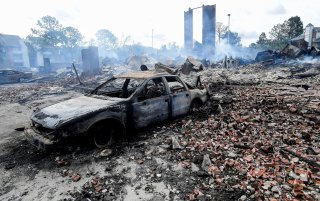 Hurricane Ida made landfall in Louisiana over the weekend, and the winds have already knocked out power in the entirety of New Orleans, while also inflicting a huge amount of human suffering.

There are also indications that the gasoline supply will be affected.

According to a report by the Bureau of Safety and Environmental Enforcement (BSEE), “personnel have been evacuated from a total of 288 production platforms, 51.43 percent of the 560 manned platforms in the Gulf of Mexico. Production platforms are the structures located offshore from which oil and gas are produced. Unlike drilling rigs, which typically move from location to location, production facilities remain in the same location throughout a project’s duration.” BSEE issued the report on Sunday.

These numbers are a result an evacuation that occurred before the storm reached land.

GasBuddy, meanwhile, published a guide over the weekend for finding gas stations with fuel and power in hurricane conditions.

The site has activated its “Fuel Availability Tracker,” in order to “help people find stations with fuel and power if supplies are limited. The storm is expected to attain hurricane status in the next few days, and conditions could become dangerous quickly.”

“When fuel availability features are activated for an area, our free app can differentiate stations that have no gasoline, no diesel or no power so that motorists can try other stations. The crowdsourced tracker can be updated by motorists and displays the status for locations that have been reported to GasBuddy. Motorists are encouraged to report the status of any station they see to help others find gasoline or avoid stations with no fuel or power,” according to GasBuddy.

The natural disaster comes as gas prices, which have hovered about the $3 mark for the entire summer, were starting to show signs of coming down again.

“As the number of Covid cases continues to surge globally, oil prices continue to be under pressure due to some countries instituting travel and movement limitations,” Patrick DeHaan, GasBuddy’s head of petroleum analysis, had said in a blog post last week. “This limits oil demand, which has led to the increase in gas prices slowing, and many states seeing slight drops compared to prices a week ago.”

Gas prices are traditionally higher in the summer months than in the spring or fall.