Hydroxychloroquine: About That 6,000-Doctor Survey... 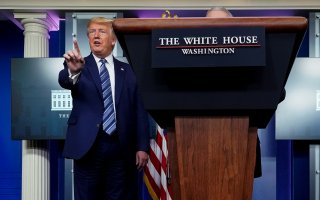 For much of the time that the U.S. has been dealing with the coronavirus pandemic, one of the major controversies has been about the medication known as Hydroxychloroquine, and a similar other drug called Chloroquine. Often used to treat malaria, lupus and other conditions, Hydroxychloroquine has emerged as a potential experimental treatment for coronavirus, with the FDA in late March approving “off-label” use for the drug.

President Trump has been vocal about promoting the use of the treatment, often sharing anecdotal stories about patients who have shown improvements after being treated with the drug. However, top adviser Dr. Anthony Fauci has urged caution about the use of the drug, which has reportedly been a matter of much rancor within the president’s coronavirus task force.

In fact, per Axios, the treatment was the topic of an "epic Situation Room showdown" over the weekend in which trade adviser Peter Navarro advocated for the use of hydroxychloroquine and Fauci and other medical advisers questioned the overseas studies that Navarro had touted. In a recent television appearance, Dr. Fauci described a Chinese study touting the effectiveness of the treatment as "not a very robust study."

In recent days, another talking point has emerged for those arguing in favor of the use of Hydroxychloroquine: An international survey of over 6,000 doctors, in which a majority of those who have treated coronavirus patients ranked Hydroxychloroquine "the most effective therapy," from a list of 15 options.

The survey was conducted by Sermo, which calls itself a “virtual doctors’ lounge," and is essentially an online community for physicians.

The Sermo survey, known as Sermo’s COVID-19 Real-Time Barometer Study, compiled answers from 6,227 physicians from 30 countries. It's conclusions include that among doctors who have treated coronavirus patients, 33 percent have prescribed Hydroxychloroquine, 41 percent Azithromycin, and 56 percent analgesics. And in the conclusion that has drawn the most media attention, Hydroxychloroquine was rated the "most effective therapy" from a list of 15 options, with 37 percent of COVID-19 treaters choosing it.

The other options listed include anti-HIV drugs, cough medications, "compassionate use of experimental drugs," Vitamin D, zinc tablets and "nothing." Among U.S. doctors, only 23 percent listed "Hydroxychloroquine or Chloroquine" — and the top answer, with 51 percent, was "nothing."

So in other words, doctors have tried many different treatments for this new and confounding virus, which is most likely still in its early stages. According to these numbers, just over a third of those doctors worldwide — and less than a quarter in the U.S. - consider Hydroxychloroquine the best of the available options. American doctors even prefer “nothing” to using it.

The doctors surveyed also determined that 83 percent of respondents anticipate a "second wave of outbreak." Among U.S. doctors, 63 percent "recommend restrictions be lifted six or more weeks from now," while 66 percent anticipate the peak of the epidemic is at least 3-4 weeks away (the survey was taken in late March.)

When asked the question "how effective have the actions taken by your local, regional and national health authorities been at reducing the spread of COVID-19?," only 12 percent of U.S. respondents answered "very effective," while 54 percent answered "somewhat effective." And when doctors were asked to name the top three topics they want more information about, the top three answers were "Efficacy of existing medications at treating COVID-19," "new treatments to prevent the rate of infection," and "when rapid tests will be available." Doctors are also asked how concerned they personally about themselves or their families becoming infected with the virus.

There are quite a few caveats to the numbers in the survey, and of the way they've been reported. One is that this is an online survey of doctors. It is not a peer-reviewed medical study, nor is it a clinical trial. Even if 97 percent of the doctors-as opposed to 37 - had answered that Hydroxychloroquine was unquestionably the best treatment for coronavirus, that would not serve as the substitute for a controlled process in which the safety and effectiveness of the drug was scientifically evaluated.

Furthermore, medical policy decisions on a macro level are not typically made based on this sort of survey of doctors’ opinions.

And finally, while most news coverage of the Sermo study mentions the 6,000 doctors who took the overall survey, the charts within the survey itself show that only 2,171 of the respondents answered the questions about which treatments they have "personally prescribed or have seen used" for coronavirus. It's also unclear exactly what "seen used" means.

So in other words, while much coverage of this study has implied that it entails 6,000 doctors agreeing that Hydroxychloroquine works for treating coronavirus, that’s not remotely close to what it actually says.

At some time in the near future, legitimate studies will almost certainly be done of the safety and effectiveness of Hydroxychloroquine, and perhaps it will emerge as a significant part of the puzzle for treating coronavirus. But while a survey about the experience of doctors coping with the crisis is certainly of interest and worthy of analysis, it should not be treated as the definitive word on whether the treatment is effective.