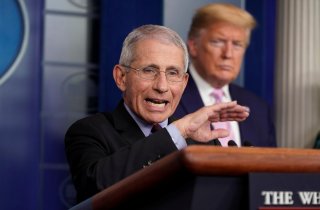 The malaria drug hydroxychloroquine has emerged as one of the most contentious topics of the coronavirus pandemic, giving rise to competing conspiracy theories aimed at explaining a tense battle within the White House whether to promote the drug to treat COVID-19 patients.

One theory holds that President Donald Trump is hyping hydroxychloroquine in order to advance his own financial interests, those of his associates, or pharmaceutical companies that make the drug.

Another theory is that Dr. Anthony Fauci, a top scientist on the White House coronavirus task force, is doing the bidding of globalist health organizations such as the World Health Organization or Gates Foundation by downplaying the benefits of hydroxychloroquine.

As with most conspiracy theories, the hypotheses behind each scenario is unclear and equally unfounded.

What is clear is that Trump and Fauci differ on whether the White House’s coronavirus task force should endorse hydroxychloroquine as a potential coronavirus treatment.

Trump began touting the drug March 19 following the release of a small, anecdotal study from France that found coronavirus patients showed some improvements after being administered hydroxychloroquine and azithromycin.

Trump praised the drug combo as a possible “game changer. ”

Fauci has not entirely dismissed the drug, but he has been far less enthusiastic that it will work against coronavirus.

“The information that you’re referring to specifically is antecdotal,” he said at a March 20 press briefing, with Trump at his side, when asked about hydroxychloroquine. “It was not done in a controlled clinical trial. So you really can’t make any definitive statement about it.”

The pair have engaged in an awkward song-and-dance at several coronavirus task force press briefings when reporters ask about the drug. Trump has repeatedly floated the idea of using hydroxychloroquine on the logic of “what do you have to lose?”

Fauci has downplayed speculation of a major rift between him and Trump on the issue. “There isn’t, fundamentally, a difference,” he said in a CNN interview March 22. He said Trump approached hydroxychloroquine from a “hope, layperson standpoint” while he looks at it through a scientific lens.

The topic has become a partisan lightening rod in the two weeks since Trump first mentioned it, laying the seeds for the competing conspiracy theories aimed at explaining the divide between the president and Fauci.

Some of the Republican’s harshest critics have in recent days speculated that he or his friends stand to make a windfall if hydroxychloroquine is widely distributed.

Anti-Trump Internet pundits have pointed out that pharmaceutical giant Novartis, which is one of dozens of companies that make hydroxychloroquine, hired former Trump lawyer Michael Cohen in 2017, seemingly to gain access to Trump.

The New York Times published a story Monday floating the possibility of a monetary angle behind Trump’s interest in hydroxychloroquine. The report said Trump has a “small financial interest” in Sanofi, the French drug maker which also manufactures hydroxychloroquine. The story also said a major Republican donor, Ken Fisher, is one of Sanofi’s largest investors.

The story provided no direct evidence that Trump would make any meaning profit off of hydroxychloroquine. Even Trump’s harshest critiques found the report flimsy.

George Conway, the husband of Trump adviser Kellyanne Conway who is openly opposed to Trump, called the report a “huge stretch,” noting that hydroxychloroquine is sold in generic form, limiting how much drug companies stand to make off of it, even in a pandemic.

A scenario that is perhaps a better explanation for Trump’s interest in hydroxychloroquine is that it has been discussed repeatedly on Fox News, Trump’s preferred TV news outlet. Fox News host Laura Ingraham reportedly met with Trump in February, along with two physicians she has had on air, to discuss research on hydroxychloroquine.

Dr. Mehmet Oz, the celebrity cardiologist, has also reportedly advised the White House on hydroxychloroquine. Trump on Saturday cited a study conducted in China that purportedly found anecdotal evidence that hydroxychloroquine has protected lupus patients from coronavirus. Oz has cited the study, which remains unverified, on Fox News and his own TV show.

The theories regarding Fauci are similarly vague.

The most coherent suggest that Fauci is in the pocket of globalist business leaders and organizations such as Bill Gates and the World Health Organization. Another theory is that Fauci hopes to extend a national lockdown in order to tank the economy to hurt Trump politically. The peddlers of that hypothesis have pointed to an email that Fauci sent to Hillary Clinton in 2013 praising the then-secretary of state.

Gates is the second largest contributor to the World Health Organization (the United States government is the largest funder), which has been widely criticized for its response to the coronavirus pandemic soon after it emerged out of China.

Some Fauci detractors have pointed to Gates’ funding for several possible coronavirus vaccines as a possible motive for Fauci to oppose a therapy.

While Fauci has stopped far short of endorsing hydroxychloroquine, he has expressed confidence in developing other treatments for COVID-19 patients.

In a March 20 interview, Fauci said that one of the coronavirus task force’s “top priorities” was developing a treatment using antibodies collected from recovered coronavirus patients.