The Hypersonic Arms Race Is Ramping Up and That's Dangerous 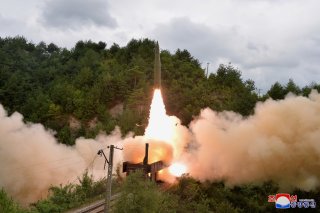 North Korea’s recent announcement that it test-launched a hypersonic missile brought hypersonic weapons back into the news. On the latest episode of Press the Button, Shannon Bugos, Research Associate at Arms Control Association, sats down with Michelle Dover to discuss the report “Understanding Hypersonic Weapons: Managing the Allure and the Risks,”  which she co-authored with Kingston Reif. They review the state of development for hypersonic missiles around the world and propose steps that would reduce the threats that these weapons pose.

Hypersonic weapons specifically refer to weapons that can reach speeds five times the speed of sound. Bugos and Reif’s report highlights the importance of examining hypersonic weapons’ role in the United States arsenal and the need to put these weapons under greater scrutiny. There is high uncertainty and a major lack of transparency around the need, risks, costs, and alternatives to these weapons.

“Ultimately, what news of this test should do is highlight the need for more conversation about the hypersonic weapons capabilities under development and those already deployed among the nations who are pursuing these weapons,” says Bugos. Bugos questions the motivations behind the pursuit of hypersonic weapons. She says officials have focused less on the military benefits and more on the need to win the competition with China and Russia on the development of the technology.

The development of hypersonic weapons is turning into a new arms race between the nations developing them.

“This can surely be described as like a growing arms race, as each tries to best the other. This is dangerous,” Bugos continues. “Hypersonic weapons pose even further upsetting this already tense offense-defense relationship and perpetuating a competitive cycle of one-upmanship.” In other words, countries continuously introduce new weapons to defend themselves from an adversary, which leads the adversary to develop new weapons, and the cycle continues.

Bugos highlights other risks with hypersonic weapons. She mentions the risk of warhead ambiguity, when it is difficult for a country on the receiving end of a missile strike to know what type of warhead—nuclear or conventional—is likely to be on the missile. Such ambiguity risks turning a conventional war into a nuclear one. This is not unique to hypersonic weapons but is a particular challenge with these weapons because of their incredibly short flight times. Hypersonic weapons also increase target ambiguity (where a missile is intended to hit) and make it more challenging to manage the threats posed by other emerging technologies.

Shannon Bugos outlines steps to create more stability in this growing arms race. She argues “the pursuit of hypersonic arms control is increasingly important” especially “as these weapons transition from an emerging technology and are deployed in greater numbers and more diverse delivery platforms.” She proposes several potential steps, including confidence-building measures in which conventional and nuclear weapons are not located at the same site. Countries could also explore an agreement that caps the number of weapons allowed in each arsenal, similar to that of the New START Treaty. She also suggests canceling the Army’s hypersonic program, the Long-Range Hypersonic Weapon, given it is not a useful weapon for their mission. Lastly, she highlights that none of the arms control concepts will gain traction in “the absence of an active and productive dialogue and ultimately negotiation about hypersonic weapons.” In that case, it’s crucial that Russia, the United States, and China engage in regular, productive dialogue surrounding the nature of hypersonic weapons.

Bugos calls on Congress to demand answers about the pursuit of hypersonic weapons capabilities and suggests action steps Congress can take. One way Congress can affect change would be including the cancellation of the Army’s Long-Range Hypersonic Weapon program into the NDAA amendment process. She also suggests Congress requests reports from the Pentagon and Congressional Budget Office in order to analyze the effectiveness and costs of these systems. Altogether, it’s a timely conversation worth the listen.

The entire interview with Shannon Bugos is available here on Press the Button.