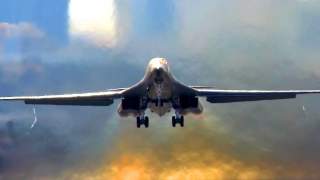 New hypersonic missiles could save the U.S. Air Force’s ailing force of B-1 Lancer heavy bombers from a possible early retirement.

After decades of hard use, the B-1s are in poor material condition and badly in need of upgrades. Modification programs and extensive depot maintenance have tied up many of the swing-wing bombers. Others are idle while awaiting spare parts.

Just seven of the 62 B-1 bombers were fully mission-capable in July 2019, South Dakota senator Mike Rounds revealed. The low readiness rate -- one of the lowest across the Air Force’s fleet -- has weighed on the service’s plans for its bomber force.

The Air Force is developing the new B-21 stealth bomber as a replacement for the B-1s as well as for the flying branch’s 20 B-2s. The Air Force is upgrading 76 B-52 bombers for service alongside the B-21.

The service hopes to acquire at least 100 B-21s starting in the mid-2020s. If, as widely expected, the Pentagon approves an expansion of the bomber force, the Air Force either would have to buy more B-21s or hold on to existing B-1s and B-2s.

At present, the plan is for the B-1s gradually to leave service starting in the 2020s. “Once sufficient numbers of B-21 aircraft are operational, B-1s will be incrementally retired,” said Maj. Emily Grabowski, an Air Force spokesperson. “No exact dates have been established.”

But the advent of new Mach-5 “hypersonic” munitions could motivate the Air Force to keep B-1s a few years longer, Aaron Mehta reported for Defense News. “Gen. Timothy Ray, the head of Air Force Global Strike Command, seemed to throw his support behind keeping the B-1 around for quite some time,” Mehta wrote. “In fact, in Ray’s mind, the B-1′s capabilities might expand.”

“Ray emphasized that while the B-21 is slowly spinning up, he can’t afford to lose any capability. Indeed, Ray seemed to posture toward keeping the B-1 over the long term.”

There are modifications to the Lancer that would add new capabilities relevant in an era of great power competition.

In August [2019], the Air Force held a demonstration of how the B-1 could be modified to incorporate four to eight new hypersonic weapons by shifting the bulkhead forward from a bomb bay on the aircraft, increasing the size inside the plane from 180 inches to 269 inches. That change allows the loading of a Conventional Rotary Launcher, the same system used inside the B-52, onto the B-1.

According to an Air Force release, first reported by Military.com, the bulkhead change is temporary, giving the B-1 flexibility based on its mission. Overall, the internal bay could be expanded from 24 to 40 weapons, per the service. In addition, the testers proved new racks could be attached to hardpoints on the wings.

“The conversation we’re having now is how we take that bomb bay [and] put four potentially eight large hypersonic weapons on there,” Ray said. “Certainly, the ability to put more JASSM-ER [Joint Air-to-Surface Standoff Missile Extended Range] or LRASM [Long Range Anti-Ship Missile] externally on the hardpoints as we open those up. So there’s a lot more we can do.”

Expansion of the B-1’s mission set hinges on the type being safe to fly. An Air Force official told Air Force magazine that the Lancer’s poor condition in part resulted from the way the service operated the bombers over Iraq and Afghanistan.

“An Air Force official said the B-1 has been flying too many missions with wings swept forward for slow flight, as a ‘flying vending machine’ of weapons for troops requiring support on the ground, when it was designed to fly fast at low altitudes with its wings swept back,” Air Force reported. “That caused too much stress on the wings, and on their attach and sweep mechanisms.”

The Air Force must complete “full scale fatigue testing” on the B-1, but “the good news is, how we’re going to operate is going to be different from what we’re doing in Iraq and Afghanistan, and we’re going to be operating like we’re assigned,” meaning doing the mission the jet was meant to do, Ray said.

Operating stand-downs of the jet have been put to good use. At Dyess [Air Force Base], Texas, Ray noted, “we had 1,400 discrepancies” on the aircraft. “We’re now down to 400, heading toward 200.” USAF now has “total confidence” in the egress systems, and the time compliance change order on the system will be finished “by the end of October [2019], much faster than we thought.” Required depot maintenance is also “not as extensive as we thought.”