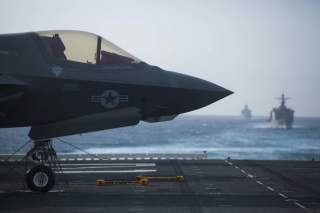 There was a time when Russian supersonic anti-ship missiles terrified Western navies. Today, Mach 5-plus hypersonic missiles like Russia’s Zircon capture all the buzz, but here’s a reminder that the older, slower weapons are still around and just as deadly.

Russia’s P-800 Onyx supersonic anti-ship missile is getting an upgrade. The Onyx-M will have a range of 800 kilometers (497 miles), compared to the current 600 kilometers (373 miles), according to Russian media. The new model will also feature improved guidance and anti-jam protection.

The ramjet-propelled Onyx, first deployed in 2002, has a maximum speed of Mach 2.5. That’s slower than the sizzling Mach 8 speed of Russia’s hypersonic Zircon anti-ship missile, or ship-killing missiles being developed by America and China. But it’s fast enough to challenge anti-missile defenses aboard Western warships.

Indeed, the Onyx has some formidable features, including fire-and-forget guidance, according to the U.S. Army’s Foreign Military Studies Office. “One of the Onyx missile’s most interesting characteristics is its guidance system. The guidance system can purportedly work in tandem with other missiles, and can allocate and classify targets based on their importance, and then select an appropriate attack scheme. Following the destruction of the primary target, the remaining missiles attack other ships, so no target is attacked by more than one missile. After an initial target lock is achieved, the Onyx shuts down its radar and descends to a low altitude (5 to 10 meters), below the operational level of most air defense radars. Once the missile emerges from beneath the radio horizon, the radar is reactivated and locks back on to the target. This feature, in conjunction with the Onyx’s high rate of speed, greatly complicates adversarial air defense and electronic warfare countermeasures.”

The Onyx – also known as the Yakhont in its export version – can be launched from ships and submarines. The design was the basis of India’s Brahmos anti-ship missile, a joint India-Russia project.

The Onyx is also part of the BRK coastal defense system, which comprises truck-mobile missile launchers that can be deployed to any threatened stretch of coast. The Russian military recently touted a new land-sea ambush tactic, in which Bykov-class corvettes will be used as floating sensors to detect enemy ship for BRK coastal defenses and their Onyx missiles. The mobile BRK launchers will quietly slip into a new firing position, receive targeting data from the corvettes, and launch a surprise salvo of Onyx missiles. Once the missiles near their target, they can switch to their onboard sensors to home in for the kill.

This reflects growing coordination between the various branches of Russia’s military in connecting reconnaissance platforms and long-range weapons, says Russian defense expert Viktor Murakhovsky. “Three components are part of the loop - reconnaissance and target designation systems, the command post, where the decision is made on the strike, and the weapon systems directly,” Murakhovsky told Izvestia. “In our case, the ships must find the enemy and transmit the information to the command post, where they will conduct an analysis of the situation and will make a decision on target destruction. Then the order and coordinates of the enemy ships will arrive at the ‘Bastion’ battery, which will open fire.”

But what’s really interesting is that a nearly 20-year-old missile, that travels at Mach 2.5, could still be so formidable (note that like many advanced weapons, the Onyx has yet to be used in combat). Despite all the fuss about hypersonic weapons being game-changers, the older, slower supersonic weapons are still a menace to surface ships.