Hypersonic Weapons Are Literally Unstoppable (As In America Can't Stop Them) 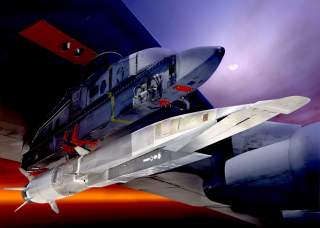 Currently, much of DoD's funding for hypersonic weapons is going toward precision strike or offensive weapons, as opposed to missile defense programs.

“The hypersonic threat is real; it is not imagination"- Lt Gen Samuel Greaves

As evidenced by numerous media accounts and Department of Defense (DoD) senior leaders’ comments, the impact and challenges posed by hypersonic missile systems are a growing and extremely complex threat to our national interests.  Hypersonic weapons are highly maneuverable, travel many times the speed of sound, and allow for the destruction of targets anywhere in the world in less than an hour. Potential targets range from leaders of terrorist organizations to a nation’s critical command and control facilities.  In March 2018, General John Hyten, commander of U.S. Strategic Command stated before the Senate Armed Services Committee, “We [U.S.] don’t have any defense that could deny the employment of such a weapon [hypersonic missiles] against us.”

During a recent Hypersonics Senior Leader Executive Forum, Dr. Michael Griffin, Undersecretary of Defense for Research and Engineering further stated…“In the last year, China has tested more hypersonic weapons than we have in a decade…If Russia were to invade Estonia or China were to attack Taiwan tomorrow, it would be difficult to defend against their strike assets”.  The recently released Missile Defense Review acknowledges the threat associated with hypersonic technology and highlights the need for a space sensor layer to track weapons through all phases of flight.  Currently, 23 Nations have demonstrated varying degrees of expertise in hypersonic technology…a number that continues to grow daily.

In response to this evolving technology, DoD and specifically, the Services are developing various programs under an effort known as Prompt Global Strike.  According to Acting Secretary of Defense, Patrick Shanahan, “This is really about industrialization, not about science."  Dr. Griffin further expands on this point stating, “It is an effort to get these systems into the field in the thousands…we are going to have to create a new industrial base for these systems.”  The Pentagon's 2019 budget reflects the department's growing interest and concern, with approximately $2 billion expected to be allocated during the current fiscal year.  In addition, the funding for key hypersonic programs has also increased from $201 million in 2018 to $278 million in 2019.

The Services are approaching Prompt Global Strike in a variety of ways.  The Navy conducted its own hypersonic test during a summer 2018 wargame near Hawaii.  In the test, a destroyer fired hypervelocity projectiles featuring fins and a radar guidance system to address targets traveling at hypersonic speeds.  In theory, these hypervelocity projectiles could potentially target ships, ground targets, aircraft, and even incoming missiles.  In April 2018, the Air Force awarded work on the Hypersonic Conventional Strike Weapon under a contract valued at $928 million. This was followed by a successful bid to develop the Air-Launched Rapid Response Weapon.  Army efforts are focused on the Alternate Re-Entry System, which is essentially a maneuverable warhead that could be launched from Air Force bombers, Navy vessels, and Army launchers.  The Army has been involved in hypersonic technology for several years. In November 2011, the Army's Space and Missile Defense Command successfully launched an Advanced Hypersonic Weapon (AHW) from the Pacific Missile Range Facility in Kauai, Hawaii to the Ronald Reagan Ballistic Missile Defense Test Site at the Kwajalein Atoll, Republic of the Marshall Islands.

In addition, the Defense Advanced Research Projects Agency (DARPA) in conjunction with industry partners is working on a hypersonic tactical boost-glide weapon.  The defense industry is also involved in DARPA's Hypersonic Air-breathing Weapon Concept competition and possibly developing a sea-launched boost-glide capability for the Navy.

Currently, much of DoD's funding for hypersonic weapons is going toward precision strike or offensive weapons, as opposed to missile defense programs.  According to Mike White, the Pentagon's assistant director for hypersonics, "If you look at the portfolio and the time phasing on the portfolio, we are stepping out first on the offensive side as we study and assess the path forward to get a robust defensive strategy."  Part of the reason is that offensive systems are technically easier and cheaper to develop.  According to Bill LaPlante, senior vice president at MITRE, "The defense, in general, is getting harder and more expensive than the offense."

The challenges of defending against hypersonic weapons have been discussed in many academic and defense industry forums, as well as in media coverage.  The impact of speed, extreme altitude changes, and maneuverability especially during the final phase of flight, present both offensive opportunities and defensive obstacles.  From a missile defense perspective, the lack of a "universal" interceptor to address the myriad flight profiles highlights the challenges associated with hypersonic weapons. To address this threat in a sustained and cost-informed manner, agreement on hypersonic imperatives must be achieved.  To meet the services' multi-domain requirements, the following imperatives must be considered from a joint missile defense perspective.