"I Am at the End of My Abilities": France's Top Military Commander Worried Armed Forces Overstretched 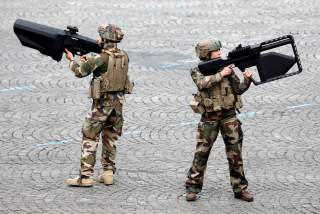 It’s not just the U.S. military that worries about overstretch.

France’s top military commander also fears that the French military has too few resources to meet too many commitments.

“Today I have to guarantee to the President of the Republic a permanent presence in the Persian Gulf, to which is added the surveillance of the Straits of Bab el-Mandeb, patrols off Syria for our red lines on the use of chemical weapons by the regime of Bashar al-Assad, and also the defense of our bastion of the Bay of Biscay and monitoring the exit of Russian submarines from their own bastion in the North Atlantic,” warned General Francois Lecointre, chief of staff of the French armed forces.

“I am at the end of my abilities,” he lamented.

Lecointre’s complaints come despite a rise in French defense spending, reversing years of budget cuts. The 2020 military budget will grow 4.5 percent to 37.5 billion Euros (US$41.4 billion), or 1.86 percent of GDP. The goal of French President Emmanuel Macron’s government is to reach the NATO goal of 2 percent of GDP by 2025.

Echoing the Pentagon’s concerns about the drain caused by overseas commitments, Lecointre pointed to France’s foreign burdens. There are 8,000 soldiers supporting operations in Africa and the Middle East, plus another 3,700 personnel in overseas bases.

Currently, more than 30,000 soldiers are engaged daily for the defense of France, underlines the general Lecointre. Of these, 8,000 are in overseas operations (OPEX), mostly in the Sahelo-Saharan belt, in the Levant or in Lebanon; 20,000 are engaged on the national territory, as part of the permanent postures of maritime safeguard or air security, in that of the Sentinel operation, or within our forces of sovereignty in our overseas communities; 3,700 are pre-positioned as presence forces abroad.

“This level of sustained commitment for many years is unprecedented and it will not decline in the years to come,” Lecointre said.

In particular, Lecointre cited shortfalls in the procurement of frigates and armored vehicles. In 2008, the French Navy identified a need for 24 frigates: in 2015, acquisition was set at only 15 frigates by 2030.  target was set at 15 buildings. In 2008, there were 452 medium armored vehicles. The current buy for 2030 is 300 new Jaguar armored reconnaissance vehicles, a heavily armed model with a 40-millimeter cannon and anti-tank missiles.

“These vehicles are certainly much more efficient, but the proliferation of theaters of operations will always weigh more,” Lecointre said.

Lecointre voiced his concerns despite the fate of his predecessor. General Pierre de Villiers resigned as chief of staff in 2017 after a clash with Macron over the defense budget.

France, like Britain, finds itself in a dilemma. As former global empires now sunk to the level of middleweight powers, they enjoy punching above their weight. Britain has committed substantial forces to the American-led campaigns in Desert Storm, the later wars in Iraq and Afghanistan, and now plans to dispatch its new aircraft carrier to the South China Sea. France has long maintained troops among its former colonial possessions in Africa, and its forces are currently supporting the struggle against Islamic militants in Mali and other African states.

However, just as America and Russia have painfully discovered, 21st Century weapons come at 21st Century prices that strain even the largest economies if purchased in large numbers.