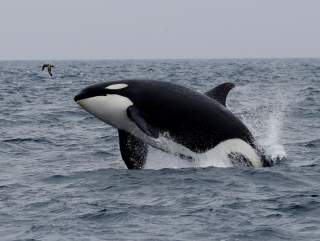 As we drew closer to the massive humpback whale, I became painfully aware how small our inflatable motorboat actually was. I also realized I’d been unconsciously holding my breath and that conversation in the boat, aside from commands from our spotter, had long since faded. The whale scientist next to me raised a crossbow and I heard a soft click as the dart released and crossed the final 20 yards of open water between us and the whale.

It hit the upper flank of the whale without even a flinch from the animal, who swam, arched and dove as if nothing had happened. As our markswoman reeled in the dart, our team celebrated the capture of a precious skin biopsy sample. Back on shore, it would be used to identify to which population the whale belonged. But at the same time, I began wondering if that same sample and others like it could be used to tell us something about the smallest forms of life – microorganisms – that associate with whales and that might contribute to their health.

Much the way human health depends on the complex community of microorganisms, called the microbiome, that live in and on us, I wanted to know more about the identity and complexity of whale microbiomes and their roles in whale health and ocean adaptations. As the largest organisms in the sea, it is possible that whales may owe much of their success to these smallest forms of life. Whale microorganisms may also serve as useful sentinels for gauging the health of the ocean ecosystems that these giant mammals inhabit.

I am a marine microbial ecologist, and my foray into whale microbiome research began with the simple question: “Do whales have bacteria living on their skin?” After all, whales live within a vast microbial soup. Just 20 drops (1 milliliter) of seawater contain around a million cells and hundreds to thousands of different microbial species. As a result, it seemed plausible to me that whale skin might have defenses that prevent colonization by harmful microbes, much like anti-fouling paints on a ship’s hull prevent bacteria and other organisms from slowing its passage through the water.

To begin this investigation, I first teamed up with skilled collaborators who use a cross bow and dart to obtain whale skin biopsy samples, much like the scene I described above. My team applied DNA sequencing and microscopy to these skin biopsy samples to demonstrate that humpback whales do indeed have bacteria inhabiting their skin, and these microbes are distinct from the cells living in seawater.

What’s even more astonishing is that different populations of humpback whales, from habitats as diverse as polar and tropical regions, share these common bacteria, with some variations linked to time of year or specific site within a region. The skin of humpback calves, taken just days or weeks after birth, also showed the same bacteria as the adults. These finding suggest that there may be some selective advantage for whales to maintain these cells and pass them to their offspring – likely during birth or while nursing.

The bacteria colonizing the whales’ skin frequently come in two forms that are attached to the skin surface. One type of bacteria forms chains that lengthen along the surface. The other type are thin bacteria that glide along the surface of the whale. It is not yet clear why whales have these bacteria living on their skin, but they may provide benefits to their hosts, possibly by preventing colonization of pathogens or larger parasitic organisms, such as barnacles.

I next teamed up with marine mammal scientists to examine the bacteria residing in the lungs of humpback whales. You are probably wondering how we sampled bacteria from a whale’s lung; it wasn’t easy. My team used aerial drones to collect the breath or “blow” of whales. With the help of skilled drone pilots from NOAA, SR3 or Sealife Response, Rehabilitation, and Research, and our own Woods Hole Oceanographic Institution the team worked together to position the drone over the blowhole of the whale and catch the spray.

We then sequenced the DNA of the bacteria within the breath samples and found the same species of bacteria present in the blow of humpback whales that live in the Atlantic and those populations that occupy the Pacific. Twenty of these bacterial species are closely related to the bacteria found in the blowholes and mouths of other marine mammals – mostly dolphins. This suggests that these bacteria have a shared past, similar to the common evolutionary history shared by their hosts.

Our latest endeavor to understand the whale microbiome is a study of their gastrointestinal (gut) microbiota. In humans, the gut microbiome is linked to host diet, and plays a role in immune function and even behavior. Carolyn Miller, a whale scientist, joined my lab several years ago with the idea that the gut-associated bacteria may play a fundamental role in a whale’s digestive processes. She worked with Arctic bowhead whales, which rely on efficient digestion of lipids, or fats, to stay warm. They need enough energy to maintain their 33.8 degrees Celsius (92.8° Farenheit) core body temperature within near-freezing waters that are a chilly 1-3°C (33.8-37.4°F).

Bowheads are baleen whales that primarily ingest shrimp-like prey called krill and copepods. The main fats within this food are wax esters, a fusion of a fatty acid and fatty alcohol, which most mammals find difficult to digest. To address her question, Miller obtained gut samples from whales that indigenous Alaskan populations harvested for their subsistence lifestyle.

Miller and her team, including WHOI lipid chemist Benjamin Van Mooy, discovered that resident microbes in the small intestine may be vital for digesting the wax esters in bowhead whales. The next step in the research is to determine the differential contributions of the whale- and microbe-based digestive processes.

This understanding of whale digestion is particularly important because the bowheads currently comprise a healthy population. As climate change melts the Arctic sea ice, marine scientists expect to see changes in the prey species whales eat. A fundamental understanding of whale digestive processes is essential to assessing the threat posed by changing prey. Additionally, this knowledge may also benefit the native communities who depend on these animals for their subsistence.

Over the course of these studies, my appreciation for the whale microbiome has grown from a simple curiosity to a necessary and important area of research. There is still so much scientists don’t know about how microbes interact with whales and contribute to their health. The fast rates of growth and wide diversity of microorganisms suggest that microbes may be sensitive indicators of change — in the whales and in the whales’ environment. As climate change continues to affect the ocean, obtaining a broader understanding of whale microbiomes is critical to understanding whale health and better managing species, populations and ecosystems.