I Waged a Massive Israel vs. Syria Tank War Simulation 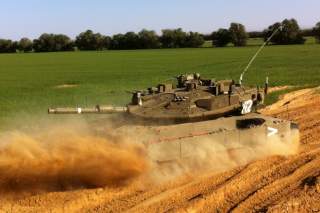 It’s Israel versus Syria in board game ‘Days of Battle: Golan Heights’

(This article by Michael Peck originally appeared at War is Boring in 2013.)

Even 40 years after the fact, the Israeli defense of the Golan Heights in October 1973 remains an epic tale of bravery and self-sacrifice as David’s tanks fired like madmen at the waves of armored Goliaths rolling relentlessly toward them.

Now we can recreate the brutal combat in Days of Battle: Golan Heights, a new board game from Victory Point Games.

What makes the battle so compelling is more than just the incredible odds. Like the Biblical David and Goliath, the combatants on that Yom Kippur afternoon differed in how they fought and what they represented.

On one side was a large, Soviet-style force that relied on rigid planning and sheer numbers — an army designed as much to keep a brutal dictator in power as to fight the Zionist enemy. On the other side was a Western-style citizen army that could neither politically nor economically afford the huge standing armies of its foes and thus had to rely on adroit tactics and hastily mobilized reserves.

The challenge of designing war games is simulating these factors. The pleasure of playing them is seeing how the designer pulls it off. Days of Battle: Golan Heights succeeds brilliantly.

Days of Battle: Golan Heights is a sophisticated game in a small package. The map is just 11 by 17 inches, overlaid by a hexagonal grid where each hex represents three kilometers. The Golan plateau is far from vehicle-friendly: the northern half of the map by Mount Hermon is rough, and even the smoother southern half is etched with wadis, hills and villages, not to mention Israeli bunkers and an anti-tank ditch along the border.

Each combat unit in the game is rated for how many hexes it can move in a turn as well as its combat strength. There are only about 15 or so Israeli pieces and roughly the same number of Syrian formations. But whereas all Syrian units are brigades and start the game along the Purple Line (the 1967 cease-fire line), a third of the Israeli units are mere battalions — and many Israeli troops don’t arrive until later in the battle.

The game lasts 12 turns. The Syrians win if they can advance to the western edge of the Golan, otherwise the victor is he who occupies the greatest number of towns at the end of the game. The Syrians start strong, but if the outnumbered Israelis can hang on, their superior armor can launch a powerful counterattack.

Arab-Israeli and NATO-Warsaw Pact war games share common design challenges. How to model rigid Soviet and Arab tactics versus more flexible NATO and Israeli command and control. How to simulate the complexity of a combined arms battlefield where each weapon has its own strengths and weaknesses.

While the Syrians had plenty of tanks, the core of their army was infantry backed by tanks, anti-tank missiles, artillery and air defense weapons. For the Israelis, it was the tanks and the air force, still basking in the glory of the Six Day War, that were Zion’s pride.

Days of Battle: Golan Heights elegantly tackles these asymmetries. The key to the game is found in the Book of Genesis, where first there was darkness and then there was light. Each day consists of two daylight turns during which the Israelis move first, followed by the Syrians.

Thus daytime is happy hour for the Israelis, whose tanks can utilize their long-range firepower. During night turns, the Syrian infantry can use their anti-tank rockets against the Israeli armor.

The essence of combined arms warfare is neatly simulated by a nuanced combat sequence. Combat is resolved by comparing the combat strength of the opposing pieces, modifying them for terrain and day/night, and then rolling dice. However, during daylight turns tanks shoot first, followed by mechanized infantry and then surviving leg infantry. At night, leg infantry shoots first, followed by mech infantry with the tanks firing last.

Again the Israelis, whose forces are mostly armor and mech infantry, eagerly await the daytime. The infantry-heavy Syrian forces rule the night. Yet the tactical situation will often force players to commit troops that are most available rather than most suitable.

Days of Battle: Golan Heights has other interesting game mechanics. While the Syrians have greater numbers, Syrian brigades belonging to different divisions cannot attack jointly, while Israeli units can. Israeli units can disengage from adjacent Syrian units, while the Syrians — burning to avenge the Six-Day War humiliation and perhaps avoid the wrath of their commanders — must either stay in place or advance closer to the Israeli lines. A lone Israeli tank battalion can pin an entire Syrian division.

Each side also has a deck of event cards that they draw from each turn and which simulate the friction of war. Some cards help a player — such as air strikes for the Israelis or Soviet replacement equipment for the Syrians — or hinder the enemy. To simulate operational tempo, on every turn each division must assume combat mode or enter rest mode, which keeps it from advancing but allows it to take replacement troops. Perhaps the nastiest event cards are the ones that allow you to order one of your opponent’s divisions to rest whether he likes it or not.

Days of Battle: Golan Heights is not a definitive simulation. There are no artillery units or detailed supply rules, and air power is extremely abstract. But the game was designed to be simple and quick enough to be played in a couple of hours — and it largely succeeds. That it gives a nice feel for the interplay of modern weapons and tactics, as well as different tactical doctrines, is a bonus.

The Syrian military is not what it was in 1973, and perhaps it never will be again. But the desperate battles on the Golan that fateful Yom Kippur will remain etched in history.

Michael Peck is a contributing editor at TNI. His Twitter is @Mipeck1