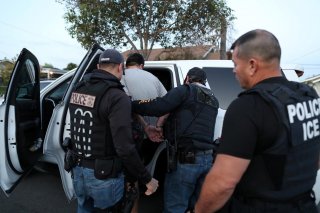 Immigration and Customs Enforcement (ICE) is pushing back against reports that detainees in its facility in Tacoma, Washington, are going on a hunger strike.

Over the past several days, activists have said detainees at the Northwest ICE Processing Center have gone on a hunger strike in order to force concessions out of ICE amid the coronavirus pandemic, claims that were then cited by several news outlets. However, the agency came out with a strong statement late Sunday, saying such claims are bogus.

“There is no hunger strike occurring at the Northwest ICE Processing Center (NWIPC). Recent claims to the contrary are completely false,” read a statement provided by ICE spokeswoman Tanya Roman and obtained by the Daily Caller News Foundation.

“The false propaganda being distributed by local advocacy groups under the premise of helping detainees does nothing more than spread misinformation that incites unnecessary fear throughout the community and among the detainees themselves,” the statement continued.

Reports of a hunger strike at the NWIPC appear to have begun with a group that calls itself La Resistencia, an immigrant-rights organization that is demanding the release of all ICE detainees at the Tacoma facility in the wake of the COVID-19 pandemic.

La Resistencia said that, beginning March 27, there were 30 individuals detained at the NWIPC who launched a hunger strike to “draw attention” to their suffering.

“We want to be released because in here there’s no protection from the virus…We are on hunger strike because we know it’s not true that we will receive medical care here in [NWIPC],” a hunger striker allegedly told a La Resistencia member via a phone call March 28.

These claims were cited by local and far-left media outlets, including the News Tribune, KUOW and Democracy Now.

Over the weekend, Le Resistencia continued its claims that detainees were undergoing a hunger strike, with the group on Sunday posting on social media that 60 “immigrant women” at the Tacoma facility launched a hunger strike to force the agency to release them. ICE said this claim was also false.

GEO Group — a private contracting company that operates numerous migrant detention centers across the country, including the NWIPC — referred the DCNF back to ICE when asked for comment about these claims.

In a press release, ICE said it closely watches and cares for individuals who claim they are on a hunger strike.

“U.S. Immigration and Customs Enforcement (ICE) fully respects the rights of all people to voice their opinion without interference. ICE does not retaliate in any way against hunger strikers. ICE explains the negative health effects of not eating to our detainees,” the agency said in a statement released Sunday.

“For their health and safety, ICE closely monitors the food and water intake of those detainees identified as being on a hunger strike,” the agency continued.