If America Is Serious About Its National Security, It Should Focus on Climate Change 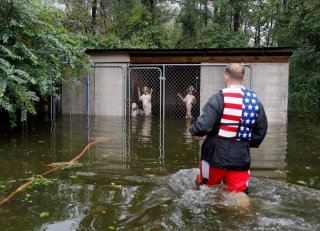 If more evidence were needed that climate change is a reality and that it is not only a phenomenon taking place in faraway continents, wildfires, hurricanes, and massive rains have devastated several parts of the United States, from the east coast to the west coast.

For being a country so preoccupied by its national security, the United States—and primarily its leadership—should take seriously the threat that climate change poses to the American nation and beyond. Climate change works as a “threat multiplier” and is likely to shaken U.S. stability and security, if left unaddressed.

The first, immediate, and visible effect of natural disasters as a result of climate change is the devastation itself. Images showing raging wildfires, firefighters putting out flames and embers, entire neighborhoods destroyed, and a sky obscured by an orange smoke have inundated the web for the last few weeks.

As of September 15, 3.2 million acres in California have been incinerated—almost double the previous record of 1.9 million, set in 2018. This number will keep rising as wildfires continue to rage unabated in the states of California, Oregon, and Washington.

Another immediate effect of natural disasters triggered by climate change, yet less visible, is the displacement of entire communities as their lands, properties, livelihoods, and neighborhoods are destroyed. Without an official system to monitor internal displacement in the United States, most of the numbers remain estimates. Yet, they offer an alarming picture: climate displacement has begun in the United States. While a report by the New York Times and ProPublica estimates that 100,000 people were forced off their homes because of the wildfires in California, at least 40,000 people had been evacuated in Oregon and about half a million people had either been told to leave their homes or to prepare to do so. However, the reality is that natural disaster-induced displacement in the United States has been underway for quite some time. The Geneva-based Internal Displacement Monitoring Center reports that over 354,000 new displacements were recorded in California in 2018 following an outbreak of fires.

While the west coast is burning, the east coast is increasingly threatened by the rise of sea levels and storms. Coastal regions, property, and critical infrastructure have been or will be exposed to damage, and even destruction as a result of climate change. These damages and destructions will come with human, material, and financial costs.

Hurricane Katrina, which made landfall near Grand Isle on August 29, 2005, must still be on everyone’s mind. It was reported to be the costliest storm in U.S. history with an estimated $108 billion in property damage. More than one million people in the Gulf region were displaced by the storm. A year after Hurricane Katrina, more than half of the population of New Orleans was still displaced. In 2019, the population has grown back to almost 80 percent of where it was pre-hurricane. Yet, many have not returned to this day.

The damage and destruction caused by climate change are not limited to civilian lives and infrastructure, major military installations and operations, outdoor training, defense supplies, as well as an increased demand for disaster and humanitarian relief overseas, will be increasingly impacted. In 2014, the Department of Defense’s Climate Change Adaptation Roadmap already warned: “climate change will affect the Department of Defense’s ability to defend the Nation and poses immediate risks to U.S. national security.”

The coronavirus pandemic has reminded us of the importance of investing in public health and making it a top priority of national and international policies. It would be a grave error to not see the threat that climate change also poses to human health. This is another reason why the U.S. government and federal agencies should work to mitigate the effects of climate change. While the health risks posed by climate change tend to disproportionately harm marginalized groups and low-income families and individuals, changing heat, air pollution, extreme weather, vector-borne diseases, and access to safe water and food will affect us all. The frequency and severity of allergic illnesses, including asthma and hay fever, are expected to increase as a result of a changing climate. This is already observed in western states currently battling wildfires. Experts worry that exposure to wildfire smoke can weaken immune systems and cause respiratory illnesses which could worsen the conditions of those already infected by coronavirus, possibly leading to more deaths.

In a 2016 scientific assessment of the impacts of climate change on health, the U.S. Global Change Research Program found that an increase of thousands to tens of thousands of premature deaths can be expected in summer months across the United States as a result of rising temperatures. The same study found that older adults and children are at higher risk of dying or becoming ill due to extreme heat.

Climate change cannot be stopped. It’s already here. Yet, there are two possibilities: let it be and allow it to get worse, or reduce the effects and get serious about taking adaptation and mitigation actions and policies. Unfortunately, the current U.S. administration has chosen the former. Without the support of the federal government, American citizens, local communities, businesses, and state officials will have to step up because “this is a climate damn emergency,” as declared a few days ago by California Gov. Gavin Newsom.

Hajer Naili is a former journalist. She currently serves as the Communications and Media Manager at The Soufan Center.