If America Wants to Prioritize Peace, It Must Formally Recognize Taiwan 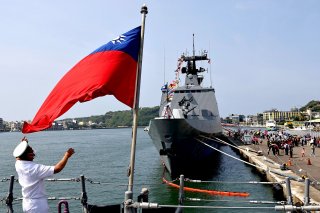 If the United States is to continue stationing troops in Taiwan, then it must also pressure the United Nations to admit them.

Last week, U.S. officials announced that two dozen American Marines have been in Taiwan for over a year training the Taiwanese military. The United States also sells Taiwan weapons worth billions. Together, these efforts verify what Joe Biden reiterated last week: the United States remains committed to helping defend Taiwan against invasion by Chinese forces.

China, meanwhile, has promised to “firmly smash” Taiwanese independence. Considering that Russia has long backed China and NATO has long backed the United States, the world’s powers could all get sucked into a conflict over Taiwan. In other words, this situation has all of the ingredients necessary to inspire World War III. Still, Taiwan isn’t represented at the institution specifically created to avert a third world war: the United Nations.

The UN initially recognized the Taiwanese government at the conclusion of the Chinese Civil War, but the UN swapped the Taiwanese representatives for representatives from the Chinese Communist Party (CCP) in 1971. The United States could have used its veto to stop this swap but instead, the United States publicly voted against expelling Taiwan while simultaneously courting closer relations with CCP Chairman and dictator Mao Zedong.

The CCP’s current dictator and chairman Xi Jinping has followed Zedong’s One China Policy and used it to scare all but seventeen nations into submission. Taiwan is thereby unrecognized by the majority of world governments.

Nonetheless, Taiwan has largely been able to circumvent these barriers by replacing a network of embassies with a network of “Economic and Cultural Representative Offices.” These offices house de-facto diplomats and allow the Taiwanese to conduct diplomatic relations with most of the world, as is evidenced by Taiwan’s purchase of American arms.

Taiwan has not, however, been able to circumvent its expulsion from the United Nations and its peacekeeping processes.

Rather than allowing another global conflict to fester while we deploy American Marines to a region that is not represented in Earth’s peacekeeping institution, the United States must prioritize peaceful reconciliation by demanding Taiwan’s entry into the UN.

As we saw when the CCP scrambled to close its Houston consulate last year, the CCP would be forced to choose whether to withdraw every diplomat, destroy every sensitive document, leave every Chinese citizen in the United States without an embassy, and fundamentally alter its intelligence capabilities—or to come to the negotiating table and seek peace.

Further, China severing all ties with the US would be a much more provocative move than the United States demanding that the UN recognize Taiwan. It’s far more likely the CCP would look for an alternative solution that allows it to save face.

In fact, Xi said this weekend that it’s in the CCP’s best interest to pursue “unification through peaceful means” that seemingly don’t involve battling at least two dozen American marines and risking the outbreak of a third world war. Russian dictator Vladimir Putin, the only other barrier to admitting Taiwan to the UN, similarly announced that the CCP “does not need to use force” to achieve its goals in Taiwan.

Taiwan is unlikely to put much faith in such a dialogue, but they would be wise to take the opportunity to at least buy time. Meanwhile, the US must learn from the CCP that pursuing dialogue and diplomacy doesn’t mean getting pushed around.

To the contrary, with two dozen U.S. Marines already deployed to a region that the CCP considers to be its own, demanding that Taiwan is at least admitted to the UN represents both a de-escalation and the re-assertion of American values.

Even if we also prepare for war, the United States must prioritize peace and publicly pressure the CCP toward peaceful reconciliation at the UN.

However the CCP chooses to react to the United States aligning our Taiwan policy with reality, the CCP cannot be better positioned than it is now: an international bully which other nations follow out of fear.

Samuel Teixeira was born in New London, Connecticut, and graduated from the University of Virginia in 2015 with a BA in Government. He is a Contributor with Young Voices whose work has appeared in International Policy Digest, The National Interest, and RealClearWorld.