If America's Economy Is So Strong, Why Is Elizabeth Warren Fighting To Change It? 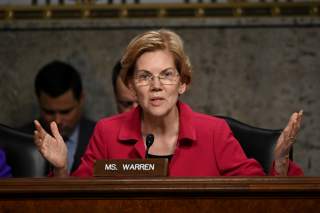 Consider three observations about the US economy. First, it’s still generating gobs of jobs more than a decade into a record-long economic expansion. That’s the big story of the October jobs report. The decent 128,000 payroll gains looks even better considering it was depressed by the GM strike and census employment. Even so, after revisions, job gains have averaged 176,000 over the past 3 months. Second, real wages continue to rise, especially on the lower end thanks in great part to the tightening labor market. Third, no big economy is more competitive than America’s, according to the World Economic Forum’s new global competitiveness report, an analysis built from hard data and a business leader survey. America “remains an innovation powerhouse.”

Are there problems? Sure there are, with the biggest being chronically anemic productivity growth. But none of the above really fits into Elizabeth Warren’s embrace of the “rigged economy” and “broken capitalism” thesis as justification for her claim the American economy needs “big structural change.” Her new plan to pay for her version of “Medicare for All” seems to ignore both what’s happening right now in the economy and potential risks embedded in her financing scheme.

Warren would a) raise the capital gains tax rate to match those on labor income under a “mark to market” accounting system, b) institute a 6 percent wealth tax, c) double the corporate income tax to 42 percent, and d) slap investors with a financial transaction tax. As The Wall Street Journal reporter Richard Rubin rightly notes, “Each of those would be an enormous tax policy shift.” You might even call them big structural change. And that’s not even including her “economic patriotism” knock off of Trumpian American First trade protectionism. (Then there’s weird revenue estimates such as her tax enforcement plan generating 40 times the revenue projected by the CBO, according to Rubin.)

But Warren gives no sense that she’s worried about unintended consequences or deeply considered them. For instance, she continues to frame her wealth tax as tiny ding into the fortunes of the rich, but it actually equates to a sky-high income tax rate. Yet other nations with taxpayer-funded, universal healthcare systems avoid taxing their citizens and companies in the ways Warren recommends because of administrative difficulty and economic inefficiency.

America seems to have a flair for high-impact entrepreneurship like no other. Would Warrenomics suppress that superpower or business investment behavior in any way? Tackling such questions, at least for now, isn’t a priority vs. making the numbers work, if only superficially. And maybe not even that, really, given Warren’s claims that she’ll greatly reduce national healthcare spending.

James Pethokoukis is the editor of the AEIdeas blog and the DeWitt Wallace Fellow at the American Enterprise Institute.