This Image Can Only Mean One Thing: China's New Aircraft Carrier Is Almost Ready 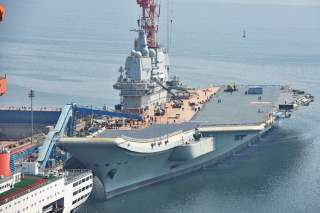 Photos that began circulating in mid-April 2019 appear to depict shipyard workers in the port city of Dalian in northern China putting the finishing touches on the Chinese navy's new Type 001A aircraft carrier.

The photos might confirm what many observers long have suspected. That Beijing wants the new carrier, China's second, to be ready to sail in time for celebrations of the 70th anniversary of the founding of the People's Republic of China, scheduled for October 2019.

The photos of the Type 001A carrier seem to show rapid progress. Scaffolding has disappeared. Workers have applied high-friction deck coating. Four years after work began on the Type 001A and a year after the vessel completed her initial sea trials, the flattop appears nearly to be ready to leave port and potentially commission into service.

Once the new flattop is in service, the People's Liberation Army Navy will operate two carriers, tying it with the U.K. Royal Navy for the status as world's second-largest carrier-operator. The U.S. Navy has 11 large flattops.

The Type 001A is not a sophisticated vessel. It's a slightly-improved copy of the Chinese navy's first carrier, the Type 001 Liaoning.

Liaoning is a Cold War-vintage, ex-Ukrainian vessel that China acquired in the late 1990s ostensibly in order to convert the ship into a floating hotel. After extensive refurbishment, Liaoning in 2012 commissioned into service. Her air wing includes more than a dozen J-15 fighters plus helicopters.

But the first two flattops lack the steam catapults that U.S. carriers use to launch heavy aircraft. Instead, they boost their planes into the air by way of an elevated ramp.

The Chinese navy is developing a jet-powered, carrier-capable drone, but this too is incompatible with the Type 001 and Type 001A carriers.

The Tian Ying's heavy-duty landing gear and twin nose-wheels are typical of aircraft that conduct high-impact landings aboard aircraft carriers.

"The Sky Hawk will also operate on China's future aircraft carriers that will use electromagnetic catapults," Global Times paraphrased an unnamed military expert as saying.

In the meantime, don't expect any of China's first two flattops to venture too far from home. "The primary purpose of this first domestic aircraft carrier will be to serve a regional defense mis­sion," the DIA claimed. "Beijing probably also will use the carrier to project power throughout the South China Sea and possibly into the Indian Ocean."