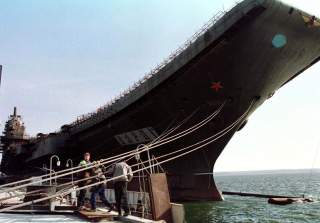 Key Point: China really wanted an aircraft carrier so it decided to buy the old Varyag from Ukraine. Although it made a tough journey and required a lot of repairs, the carrier was transformed into a real warship.

A Chinese businessman (with covert support from the PLA) purchased the ship for $30 million, ostensibly for use as a floating casino. Hijinks ensued as the ship slowly made its way to China, a process that lasted almost two years. Finally, in 2002, the Varyag arrived at Dalian shipyard.  Even then, it seemed that Varyag would simply serve as a basis for future Chinese designs, and not as an active carrier. But after nearly a decade of refit and reconstruction, Varyag re-emerged as Liaoning, a fully capable ski-jump aircraft carrier that was, by most accounts, more reliable and more capable than her Russian half-sister, Admiral Kuznetsov.

Robert Farley , a frequent contributor to TNI, is a Visiting Professor at the United States Army War College. The views expressed are those of the author and do not necessarily reflect the official policy or position of the Department of the Army, Department of Defense, or the U.S. Government. This piece was originally published in November 2018 and is being republished due to reader's interest.