The IMF Is Throwing Cold Water On Trump's Economy Boom 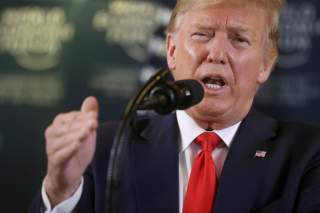 There could not be a sharper contrast between President Trump’s bullish assessment of the US economic outlook at the Davos World Economic Forum and that of the International Monetary Fund (IMF) in the sober World Economic Outlook report it issued ahead of the Davos meeting.

According to President Trump, the American Dream is back and the US is enjoying an economic boom the likes of which the world has never seen before. Unemployment is at a fifty-year low, wages are increasing at the fastest rate in a decade, and the stock market is setting new records on almost a daily basis.

The IMF is diplomatic enough not to mention that, if realized, these rates of US economic growth would be below those achieved during the Obama years. The IMF also does not mention that under President Trump’s watch the US budget deficit has ballooned to over US$1trillion, or 5 percent of GDP, and the US public debt is well on its way to exceed 100 percent of GDP.

The IMF warns that despite the recent truce in the US-China trade war, the risks to the US and global economies are very much towards the downside. Among these risks are those of rising geopolitical tensions between the US and Iran, intensifying social unrest across many countries (presumably Chile, Colombia, France, Hong Kong, Lebanon, and Venezuela), and a possible deterioration in US-European trade relations.

More ominously yet, the IMF warns that a materialization of any of these risks could trigger rapid shifts in financial sentiment, portfolio reallocations toward safe assets, and rising rollover risks for vulnerable corporate and sovereign borrowers. It also warns that widespread tightening of financial conditions would expose the financial vulnerabilities in the world economy that have built up over years of low interest rates.

Judging by his remarks in Davos, Mr. Trump seems to have decided that a strong US economy will be front and center in his election campaign. Judging by the IMF’s downbeat World Economic Outlook update, it is not clear that doing so will assure Mr. Trump’s reelection in November.