Incirlik Air Base Has Become a Risk to the United States 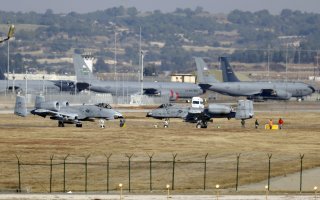 Coupled with the increasing amount of tensions between Turkey and the European Union, as well as the United States, along with Turkey’s purchase of the Russian-made S-400 Air Defense system, it is time for the United States to seriously consider closing down the American presence at Incirlik Air Base on the Anatolian Peninsula.

History of Incirlik Air Base

Incirlik Air Base has played host to units from the United States Air Force Base since 1955. Originally named the Adana Air Base, the name was changed to Incirlik Air Base in 1958. The current U.S. squadron at Incirlik is the 39th Air Wing of the U.S. Air Force. While the United States removed its nuclear-tipped missiles in 1963, the air base still houses some fifty B61 gravity delivered nuclear munitions.

During the Cold War, Incirlik served as the southeastern part of NATO’s airpower to deter aggression from the Soviet Union. It was also a powerful staging point for the United States to influence security issues in the Middle East. During the ISIS war, Turkey authorized the use of Incirlik Air Base against the ISIS Caliphate from 2015 until the decision by President Donald Trump in 2018 to withdraw U.S. forces from Syria and end United States participation in the air war against ISIS.

The Air Wing has no permanently assigned aircraft but serves a forward operations base. It is capable of hosting numerous types of aircraft, from the front-line fighter jets of the U.S. Air Force to its logistic aircraft to move troops, munitions, and other supplies in the Middle East.

The rise of Recep Tayyip Erdogan in Turkish politics has also seen a rise in Turkish nationalism and a growing reliance by Erdogan on the Islamic political party Justice and Development Party (AKP).

President Erdogan is a strong nationalist and is identified with the strong Islamist movement within Turkey. President Erdogan has also embraced the concept of the Blue Homeland Doctrine making treaties with the UN-backed Government of National Accord in Libya to carve out an Exclusive Economic Zone in the eastern Mediterranean between them. Using the Blue Homeland Doctrine, Turkey has been challenging the areas currently in the Exclusive Economic Zone of Greece with its Navy in order to exploit the rich natural gas fields in the Eastern Mediterranean.

Erdogan’s intervention in Libya and his uneasy alliance with Russia, coupled with his purchase of the S-400 Russian-made air defense system, has led to an estrangement between Turkey and NATO, as well as the United States canceling Turkey’s participation in its F-35 fighter program. With Greece an active participant in the F-35 program, with a history of basing agreements with the United States, Greece would seem to be a logical replacement for the U.S. air base in Turkey.

Moving the 39th Air Base Wing Out of Turkey

With Turkey gradually, but steadily moving away from NATO and the West, and becoming more and more identified with Islamic political and religious forces in the Middle East, it would appear to be time to close out the 39th Air Base Wing in Turkey and moving it to a more politically hospitable country such as Greece.

The United States currently has only one military base in Greece on the island of Crete, the Naval Support Activity Souda Bay, which is home to a small contingent of U.S. Naval personnel. In operation since the mid-1950s, it is a small base with only about 800 U.S. military personnel assigned. NSA Souda is located on the Hellenic Air Force Base near the village of Mouzouras.

While the Greek Air Base does have a working runway, it would not be able to support the facilities and personnel necessary to replace the U.S. Air Base at Incirlik.

With the increasingly erratic behavior of President Erdogan, and the growing influence of Islam in Turkey, coupled with the vulnerability of the storage of fifty B61 nuclear gravity bombs at Incirlik, the removal of the U.S. military presence at Incirlik Air Base should not be a question of if, but rather a question of when U.S. forces are removed.

Richard Caroll is a retired economist from the Bureau of Labor Statistics and U.S. Army veteran. He has been previously been published in Real Clear Defense, as well as the International Policy Digest and Foreign Policy News.