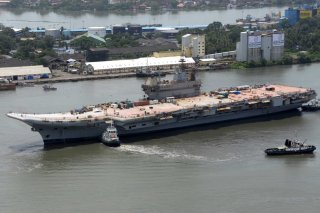 This week the Indian Navy announced that its first indigenously-built aircraft carrier, INS Vikrant (IAC-1), successfully passed its basin trials at the Cochin Shipyard Limited (CSL) in Kochi. Sea trials for the new carrier are expected to start in early 2021.

The basin trials are conducted to test the performance of the main propulsion plant of the ship while it is in harbor, and serves as a precursor to the ensuing sea trials, NavalToday reported. The extensive trials also covered all four LM2500 gas turbines, main gearboxes, shafting and controllable pitch propellers, along with their integrated control systems. Additionally, major auxiliary equipment and systems including the warship's steering gear, air conditioning plants, compressors, centrifuges, all sixty critical pumps, power generation and distribution system, major machinery fire-fighting and de-flooding systems, deck machinery, and nearly the entire internal communication equipment were also tested during the basin trials.

On the official account of the Indian Defence Public Relations Officer for Kerala, under directorate of Public Relations of Ministry of Defence (MoD), Government of India (@DefencePROkochi), photos of the test were also posted.

The trials were conducted by the CSL and the Indian Navy in complete compliance with all Covid-19 related health and safety precautions.

"It is solely due to the astute planning and the implementation of necessary safety measures on ground by the navy and the shipyard that the work onboard aircraft carrier could progress unhindered even during the peak of pandemic," the Indian Navy said in a statement.

INS Vikrant is very much a testament to Indian Prime Minister Narenda Modi's "Aatmanirbhar Bharat" – "self-reliant India" – policy. The Indian Navy has previously operated aircraft carriers, but none have been truly domestically built.

This included the previously named Vikrant (R11), but that was a British Royal Navy Majestic-class that was laid down as HMS Hercules during the Second World War. India purchased the incomplete carrier in 1957 and construction was completed in 1961. Even India's current carrier and flagship INS Vikramaditya began life as a modified Kiev-class, which entered service with the Soviet Navy before being decommissioned by Russia in 1996. It was not without problems, and this included transforming the vessel from a helicopter carrier with a partial flight deck to an aircraft carrier with a launch ramp.

The warship, the largest ever built in India, is a 260 meters long and 60 meters wide vessel and displaces 37,500-tons. Its maximum speed is 28 knots, and it has a range of 7,500 nautical miles at a speed of 18 knots. According to NavalNews, INS Vikrant is set to receive a large crew complement composed of 160 officers and 1,400 sailors. The STOBAR (Short Take-Off But Arrested Recovery) aircraft carrier will be able to accommodate up to thirty fighters and helicopters, including Mig-29K fighters jets and Ka-31 helicopters.

This new domestically-built carrier, which utilized close to 75 percent of material including 23,000 tons of steel and equipment sourced in India, could be seen as just what New Delhi needs to remain the dominant power in the Indian Ocean.

Peter Suciu is a Michigan-based writer who has contributed to more than four dozen magazines, newspapers and websites. He is also the author of several books on military headgear including A Gallery of Military Headdress, which is available on Amazon.com.