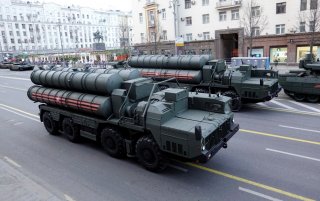 While Russia and China are not officially allies, the two nations remain partners when it comes to military hardware. Even as China has built up its domestic arms industry, Beijing has continued to turn to Moscow for aircraft engines and air defense systems.

That partnership is poised to continue. China and some former Soviet states could be among the first buyers of the advanced S-500 anti-aircraft missile system.

The mobile surface-to-air missile/anti-ballistic missile system was developed by the Almaz-Antey Air Defence Concern to replace aging A-135 missile systems currently in use. The S-500 is considered a step up from the S-400 Triumf, but would supplement that platform rather than replace it. It has a range of around six hundred kilometers and is reportedly able to target hypersonic cruise missiles as well as stealth aircraft. Analysts claim the S-500 could even target satellites in low-earth orbit.

It could make sense that China would have interest in such a platform as it continues to assert its position in the South China Sea. Where things get a little complicated is that India could be the first potential buyer for the S-500 “Triumfator-M.” Yet the fact that potential adversaries China and India have both expressed interest doesn’t seem to be a serious reason for concern for Russia at this point.

“We consider India, as well as China and all the states that we have long-standing, partner and predictable relations with as prospective buyers of this latest system,” said Dmitry Shugayev, Director of Russia’s Federal Service for Military-Technical Cooperation, in an interview with RBC media on Tuesday, according to a report from state-owned media outlet TASS.

India has been a longstanding strategic partner of Russia, Shugayev added. New Delhi has long employed Russian-made hardware including tanks, small arms, and aircraft. Its current naval flagship of the Indian Navy, INS Vikramaditya, is also a former Soviet aircraft cruiser that was sold to New Delhi in 2004.

“We have concluded a contract for the S-400 and they will receive the first battalion set of this system by the yearend [sic],” said Shugayev. “That is why it is quite logical that they will display their interest in the foreseeable future and request the S-500 from us as well.”

Even as Russia is lining up potential foreign customers, it could be some time before any of the advanced air defense systems are exported. Russia is expected to begin exporting the S-500 surface-to-air missile system after the required number of systems is actually delivered to the Russian troops. In September Reuters reported that Russia completed tests of the S-500 surface-to-air missile system and has started supplying it to the armed forces.

“Time will show when this happens,” said Shugayev. “We will examine potential requests individually in each specific case.”