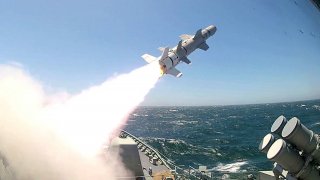 On April 13, the United States Department of Defense Defense Security Cooperation Agency (DSCA) announced that the Department of State approved two foreign military sales of naval weapons to the Republic of India. The sales were for the AGM-84L air-launched Harpoon anti-ship missile, and the Mk54 Lightweight Torpedo.

However, the sales are relatively small—only ten Harpoons and sixteen Mk54s—though support equipment and practice torpedos are included in the package. The weapons are also set to be solely used on India’s fleet of P-8I Poseidon Maritime Patrol Aircraft, giving the aircraft strike as well as surveillance capability. The small numbers probably mean that the armament is meant to be an interim capability while India integrates their own torpedoes and anti-ship missiles onto the P-8I.

But it’s not yet clear whether the sale will go through, as the DSCA’s announcement simply means that the sale may happen; it does not confirm that a sale will happen. There likely will be internal resistance to the sale, as India’s own Defense Research and Development Organization has a lightweight torpedo of their own, the Shyena, which is a mature product. The Shyena was delivered to the Myanmar Navy in July 2019, and is supposedly in service in the Indian Navy. However, India has had P-8Is for over five years at this point, so DRDO has had plenty of time to integrate their own design.

The sale of Harpoons is more understandable. While India has the joint Russian/Indian BrahMos missile, the missile is very large, and likely would have significant dimensional and technical difficulties integrating with the P-8I. While the BrahMos has been integrated onto the Su-30MKI fighter, this process has taken a long time, and only recently was completed.

The sale also poses geopolitical concern in the region. Both DSCA announcement emphasized that their respective sale would not upset the military balance in the region, but despite that Pakistan has complained that the arms sale is destabilizing, with a Pakistan Foreign Ministry spokesperson even giving the possibility that India may conduct a false flag attack while global efforts are focused on combating the COVID-19 coronavirus. Pakistan also operates Harpoon anti-ship missile, albeit in earlier versions, though it does not operate the Mk54 Lightweight Torpedo.

In the larger picture, this follows the trend of India wanting to “buy American” weapons, continuing on their procurement of AH-64 Apaches and Sig Sauer, Inc. rifles. This is a marked change from their earlier policy of primarily buying European or Russian equipment, though Russian equipment is still heavily represented in the Indian military. However, it has been reported that the Indian military was not satisfied with the performance of Russian missiles during the 2019 India/Pakistan border skirmish.

But as stated above, this has the possibility of pushing Pakistan, which has traditionally bought American too, away. Pakistan seems to be increasing their defense cooperation with China, and will likely continue to do so into the near future. Pakistan already cooperates with China on the Zulfiquar-class frigate, which is set to be armed with a fully Chinese armament set. Chinese and American equipment may face each other for the first time in combat during a India/Pakistan skirmish.