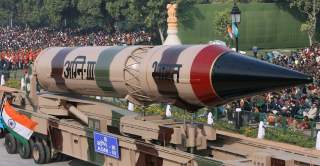 India’s first nuclear-capable missile able to reach all of China will soon be inducted into the country’s armed forces.

On July 1, The Economic Times reported that the first batch of Agni-V intercontinental ballistic missiles (ICBM) will be inducted into the Strategic Forces Command (SFC) “soon.”

The report cited identified “official sources” as having provided the information.

Those sources refused to be more specific on the timeline, but did reveal that “a series of user trials are being conducted before the country’s most sophisticated weapon is handed over to the SFC.”

With a range of 5,000 kilometers, the Agni-V technically does not fall into the category of intercontinental ballistic missile as it is usually identified. Most classify ICBMs as missiles with a range of at least 5,500 kilometers.

For all intents and purposes, however, the Agni-V is an ICBM for India for one reason: China.

India’s nuclear forces are trained on two potential adversaries: Pakistan and China. Delhi has long been able to hold at risk Pakistan’s major population centers. But many of China’s most populated cities have stood outside the range of India’s ground-based missiles.

As the Economic Times article noted: “the missile is capable of bringing targets across China including its prominent cities like Beijing, Shanghai, Guangzhou and Hong Kong under its range.”

This point about the range was made by the late President APJ Kalam, who was often referred to as the “Missile Man of India” for the pivotal role he played in developing New Delhi’s ballistic missiles as an aerospace engineer at Defense Research and Development Organization (DRDO), India’s premier defense agency.

“An ICBM with 5,000-km range was enough as the potential enemies were well within this range,” Kalam told university students before India’s first Agni-V test.

When a student asked him if an ICBM with a longer range should be developed, Kalam simply replied that India didn’t face threats from the transatlantic community (the only places outside the range of the Agni-V).

The Agni-V is a three stage solid fueled missile that carries a 1.1 ton warhead. It reportedly has a length of about 17.5 meters, a diameter of two meters and a launch weight of 49,000–55,000 kilograms.

It is also carried on a road-mobile truck, making it very survivable.

The missile was first tested in April 2012 to great fanfare in India. In the run-up to the test, India media declared: “Tipped to be a game changer, Agni-V will make the world fear India. It will extend India's reach all over Asia, Africa and Europe. India can now strike any part of the world except America.”

India next tested the missile in 2013. The next test in 2015 was significant because it was the first time it was tested from a canister.

As an official press release from the time said, “The earlier two flights of Agni 5 . . . were in open configuration and had already proved the missile. Today’s launch from a canister integrated with a mobile sophisticated launcher, was in its deliverable configuration that enables launch of the missile with a very short preparation time as compared to an open launch.”

Avinash Chander, the then-chief of India’s defense technology agency, the Defense Research and Development Organization, which designed the missile, called the test a “a momentous occasion.”

The next test came the following year in 2016. It wasn’t tested again until this year, but has been tested twice so far in 2018.

The first time was in January and followed by a second test last month. The most recent test was focused on improving the missile’s accuracy. According to IHS Jane’s, the recently tested Agni-V “was equipped with newly developed navigation and guidance systems as well as an onboard computer.”

Even when the Agni-V missile is inducted into service, improvements could still be coming. In the past, there has been speculation that India could deploy maneuverable re-entry vehicles to increase accuracy and evade missile defense systems.

Many observers also believe that India will eventually equip the missile with multiple independently targetable reentry vehicles (MIRVs). Those allow a single missile to launch warheads at different targets.

Zachary Keck is a former managing editor of the National Interest. Follow him on Twitter at @ZacharyKeck.