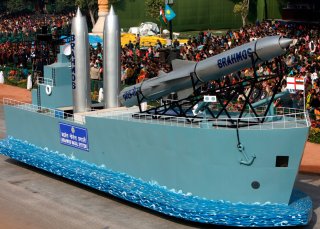 India’s military has test-launched an improved version of the BrahMos cruise missile from its latest stealth guided missile destroyer, according to a statement issued by the country’s Defence Research and Development Organization (DRDO).

"Advanced sea to sea variant of BrahMos Supersonic Cruise missile was tested from INS Visakhapatnam (destroyer) today,” the DRDO tweeted on Tuesday. “The missile hit the designated target ship precisely.” India’s Navy added that the test “represents a twin achievement,” attesting to the “accuracy of the ship’s [Visakhapatnam’s] combat system” and validating the BrahMos missile’s capabilities. Indian minister of defense Rajnard Singh congratulated the team working on the project, according to Naval News. “The robustness of the Indian Navy mission readiness is reconfirmed today after the successful launch of the advanced version of BrahMos Missile from INS Vishakhapatnam today,” he stated.

The Vishakhapatnam is the lead ship of the P-15 Bravo-class of guided-missile stealth destroyers, laid down in 2013 and commissioned in late November 2021. The other three vessels of the  P-15 Bravo-class are in various stages of testing and construction and are expected to be introduced into service through the mid-2020s. The Vishakhapatnam improves on its Kolkata-class predecessor with upgraded onboard electronics, a more robust 127 mm naval gun, and revised bridge design intended to minimize the vessel’s radar cross-section (RCS). The Vishakhapatnam carries up to sixteen BrahMos missiles and thirty-two Barak-8 surface-to-air missiles.

BrahMos is a supersonic cruise missile jointly developed by Russian design bureau NPO Mashinostroyeniya and the DRDO. The missile, which was first test-fired in 2001, boasts an operational range of up to 400 kilometers when air-launched and 500 km on surface and sea platforms. The BrahMos missile is expected to be compatible with a wide range of Indian surface vessels, land-based systems, submarines, and aircraft, the latter including as many as forty of the Indian Air Force’s modified SU-30MKI multirole fighters. The missile’s air-launched version, BrahMos-A, was cleared by the Indian Defense Ministry for serial production after a successful test launch in  December 2021. Russian state news outlet TASS reported that Rajnath Singh previously hailed the BrahMos project as “a symbol of the Russia-India strategic partnership.” The Defense Minister also reportedly stressed that the missile substantively boosts India’s capability to repel sophisticated threats.

BrahMos is expected to be succeeded by BrahMos-II, a hypersonic cruise missile that can reportedly reach speeds of up to Mach 8, or around 9800 kilometers per hour, and boasts an operational range of up to 1,000 km. The new missile, which will be carried by both Russian and Indian platforms, is expected to enter testing in the mid-2020s.