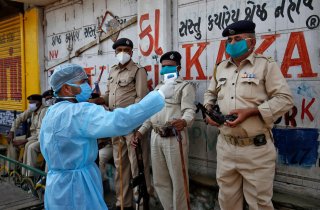 There’s a war of narratives being fought between China and much of the rest of the world about how the Covid-19 pandemic began and who’s responsible. Beijing has embarked on a misinformation campaign to try to erase its tracks and absolve itself of guilt by directing the blame onto other nations, especially the United States.

China’s friendly diplomatic overtures to India are part of that effort, and are intended to persuade New Delhi to support Beijing’s confected version of how and where the disease originated. So far, India has played along.

The Indian government hasn’t publicly blamed any nation for causing the pandemic, though it has matter-of-factly acknowledged that the first case was reported in China. But that reflects typical Indian foreign policy behaviour rather than indicating any agreement with Beijing.

Until a fortnight ago, relations between China and India were less than harmonious, particularly after the frostiness that followed China’s advocacy on Pakistan’s behalf over the Kashmir issue at the United Nations last August.

In December 2019, New Delhi expelled a Chinese ‘research vessel’ from its waters near the Andaman and Nicobar Islands. Early this year, India seized from a Chinese ship bound for Pakistan an industrial autoclave that it believed could be used to build long-range ballistic missiles and satellite launch rockets.

Then China again raised the Kashmir issue at the January meetings of the UN Security Council, adding to New Delhi’s chagrin.

But now we’re seeing a new modus operandi between Beijing and New Delhi.

During a conversation with Indian External Affairs Minister S Jaishankar last month, Chinese Foreign Minister Wang Yi raised the issue of what the novel coronavirus was being called. India agreed not to call it the ‘China virus’.

Over the past fortnight, the Chinese government and China-based businesses such as Alibaba and TikTok have offered assistance to India in the form of medical supplies, testing kits and even makeshift hospitals, most which New Delhi has accepted.

The Chinese foreign ministry released glowing statements of solidarity, including a message from President Xi Jinping marking the 70th anniversary of diplomatic relations between India and China. China’s official media, known for its condescending tone in references to India, has been extolling the virtues of Sino-Indian friendship, notwithstanding occasional references to the perils of India’s democratic system of governance.

This change in Beijing’s approach to India is clearly directly linked to its campaign to change the Covid-19 narrative.

Beijing protested against India’s ban on travellers from China in early February and is reported to have delayed clearance of an Indian evacuation flight to land in Wuhan. And New Delhi’s medical assistance to China during the peak of the crisis in Wuhan wasn’t publicly acknowledged by Beijing at the time. The acknowledgement of India’s help came later, coinciding with New Delhi’s agreement not to blame China for the virus.

So, China is cranking up the charm offensive. But that’s not to say that India is buying into the Chinese narrative or that it’s ignorant of Beijing’s real motives. Several prominent commentators in New Delhi have criticised China for its role in the pandemic. The All India Bar Association has filed a complaint against China at the UN Human Rights Commission.

In a recent survey , 67% of Indians polled blamed China for the pandemic and 50% said they believed that calling it the ‘Chinese virus’ wasn’t racist.

Editorials in China’s Global Times are positioning China as ‘probably the only one [able] to help a country as populous as India’ and are warning against Indian media and individuals’ attempts to ‘stigmatise’ China. The newspaper is also emphasising the harm being caused to the Indian economy from the country’s inability during the government-imposed lockdown to export goods to China.

Despite Chinese pressure, however, India continues to act steadfastly in its own interests. The government didn’t shy away from trying to curb a full-blown crisis by promptly airlifting its citizens from Wuhan, placing travel bans on visitors from China, and even cancelling visas issued to Chinese citizens before 5 February.

China’s own travel bans and quarantining of entrants to China make it easier for New Delhi to resist criticism from Beijing. In contrast, Pakistan was pressured to resume its flights to and from China just three days after suspending them in early February.

At the same time, India sees merit in extending cooperation with other countries, most significantly within a ‘Quad-Plus’ setting , to collaborate on procuring medical supplies and equipment and developing a vaccine.

New Delhi has also attempted to resurrect the South Asian Association of Regional Cooperation to fight the pandemic. India hopes, in the process, to reclaim its leadership in the region.

India seems to recognise that no single country can be the partner it needs. That’s a healthy instinct that comes from deep within Indian security and political culture.

But India continues to pay lip service to the strength of Sino-Indian ties, and its tactics have already begun to bear fruit. Last week, China refused to bring up the Kashmir issue at the UN, despite Pakistan’s requests.

India will continue to build a workable relationship with Beijing, extract benefits where it can, and refuse to participate in any initiative to name and shame China. At the same time, it will cooperate with regional partners to find solutions to the dual health and economic crises.

Strategic autonomy and multi-alignment are India’s default foreign policy settings; there’s no reason to believe New Delhi will diverge from them in this case.

This article by Aakriti Bachhawat first appeared in The Strategist on April 4, 2020.