India May Build Its Own Carrier-Based Jet 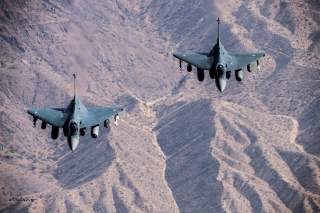 India is considering whether to build its own carrier-based fighter.

The Indian military is envisioning a twin-engine version of its land-based Tejas lightweight fighter. The new jet, which could be deployed by 2032, would replace India’s Russian-made MiG-29K carrier-based fighters. India currently has one carrier, the Vikramaditya, and is building a second. An Indian Navy contract calls for fifty-seven jets, with one candidate being Boeing’s F/A-18E/F Super Hornet.

But the prospects for an Indian-built carrier fighter were heightened when the Indian Ministry of Defense announced that a prototype, single-engine naval version of the Tejas made an arrested landing (see the video here) aboard the Vikramaditya in January 2020. The twin-engine design, called the Navy Twin Engine Deck Based fighter, is still in the conceptual stage.

“Weighing 23 tonnes, the Navy Twin Engine Deck Based fighter would be significantly larger than the 13.5 ton Tejas Mk-1 fighter which has entered squadron service with the Indian Air Force and the 17.5 ton Tejas Mk-2 which is meant to be inducted into the Indian Air Force from 2030,” according to India’s NDTV television network. “The fighter would be in the size of the MiG-29K currently being operated by the Indian Navy on its aircraft carrier, the INS Vikramaditya and would have the ability of carrying a weapons payload of nine tons. It would feature folding wings to save space on the deck of aircraft carriers.”

“The jet would likely have a top speed in the range of Mach 1.6 or just under 2,000 kilometers [1,243 miles] per hour,” NDTV added. It would feature electronics and weapons that India is developing, including Active Electronically Scanned Radar (AESA) radar and a long-range version of the Astra air-to-air missiles.

The single-engine prototype appears to be a stepping stone toward a twin-engine design. “Project designers say they could '’very comfortably develop'’ the new twin-engine Tejas variant based on the experience they have gained in testing the naval prototype of the Tejas fighter,” said NDTV. “The prototype is powered by a single U.S.-built General Electric F404-GE-IN20 turbofan engine which is not seen to be powerful enough to justify serial manufacture of a Naval Tejas in its present avatar other than in very limited numbers. The significantly larger twin engine Tejas now being proposed would be fitted with two more powerful General Electric F414 engines and would have a significantly higher weapons payload and range. The additional thrust provided by two engines would also guarantee a larger safety margin for pilots while taking off and landing in hot and humid tropical weather conditions out at sea in the Arabian Sea and Bay of Bengal.”

Talk of an Indian carrier jet comes as India considers developing its own fifth-generation land-based stealth fighter called the Advanced Medium Combat Aircraft, which could enter service by 2040. In addition, there could be an Indian Air Force version of the naval Tejas, the Omni Role Combat Aircraft.

But one question is when—or if—any of these aircraft will actually fly. India has a checkered history with major defense projects, including the troubled Arjun tank and the Tejas project, which dates back to the 1980s before the aircraft first took flight in 2001.

Nonetheless, the fact that advanced projects, such as a carrier jet, are even being discussed points to growing Indian self-confidence and ambition. “The fact that this would be entirely designed and developed in India would be a huge boost for our ambitions in being an aerospace power,” one aircraft designer told NDTV.