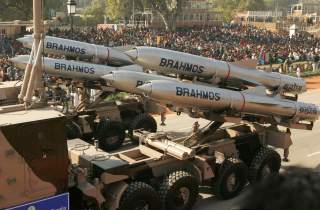 India is planning to test its Brahmos missiles later this month, according to a senior executive.

Next week Delhi will conduct a test to “validate service life extension” of the missile, according to Sudhir Kumar Mishra, the head of BrahMos Aerospace, the company set up to develop the missile. Mishra made his comments to Press Trust of India.

The test will attempt to increase the life of the missile from ten to fifteen years, according to PTI. “The test-firing will allow the armed forces to maintain an inventory of the missiles for a longer duration,” Mishra said.

Mishra went on to discuss some of the new types of Brahmos missiles the company is attempting to develop. Most notably, he explained that a new vertical dive Brahmos will soon be tested. This will enable the missile to be used in mountainous regions and against aircraft carriers.

“Recently, we demonstrated the vertical dive capability of Brahmos. This can be used against targets in mountains and also against aircraft carriers,” Mishra was quoted as saying.

Elsewhere, Mishra explained, “Two years ago, we conducted a 65-degree steep dive for the missile. . . . What I am talking about is a near vertical dive capability of 90 degrees, which will be able to engage various kinds of targets.” Tests of this new deep dive Brahmos will begin next year.

This deep dive Brahmos seems to be directed at China given Mishra’s explanation that it is useful in mountains and against aircraft carriers. The Sino-Indo border region that has seen repeated border skirmishes for decades (as well as a brief war in 1962) is extremely mountainous.

Beijing is also in the process of developing an aircraft carrier fleet and encroaching further into the Indian Ocean, which Delhi considers its natural dominion.

The Brahmos is a two-stage supersonic cruise missile that was jointly developed by India’s Defense Research Development Organization and Russia’s NPO Mashinostroyenia.

BrahMos Aerospace explains that it is a “two-stage missile with a solid propellant booster engine as its first stage which brings it to supersonic speed and then gets separated. The liquid ramjet or the second stage then takes the missile closer to 3 Mach speed in cruise phase. Stealth technology and guidance system[s] with advanced embedded software provides the missile with special features.”

One of those special features is its ability to fly extremely close to the ground to avoid missile defense systems. BrahMos Aerospace explains that during terminal phase the missile can fly as low as ten meters to the ground. The missile relies on active/pass radar for its terminal guidance, according to CSIS’s Missile Threat Project.

Thus, now India is developing an extended-range Brahmos that will travel distances of up to eight hundred kilometers. That version will be an air-launched variant likely fired from the Sukhoi Su-30 MKI multirole fighter jet, a Russian plane. Delhi has also tested a four hundred kilometer range variant of the Brahmos missile.

Notably, despite the missile’s immense speed, it actually weighs twice as much as America’s Tomahawk missiles. This speed-weight ratio makes the Brahmos incredibly lethal. As Sebastien Roblin has noted, “The combination of twice the weight and four times greater speed as a Tomahawk results in vastly more kinetic energy when striking the target. Despite having a smaller warhead, the effects on impact are devastating.”

Russia and India signed an agreement to begin developing the missile in 1998. It is reportedly based on the Russian-made P-800 Oniks/Yakhont supersonic anti-ship cruise missile. The first Brahmos missile was flight tested in 2001. Although initially designed to be an anti-ship missile, Delhi has since developed the missile into a triad threat—that is, one that can be launched from the ground, air, and sea (as well as from submarines).

Currently, the Indian Army has three Brahmos regiments and the missile is already deployed on about a dozen naval ships. The Indian Air Force (IAF) already boasts some ground-based versions of the missile and is expected to begin inducting air-launched variants later this year.

Also during 2017, India’s Navy began testing a land-attack version of the missile. “The land-attack variant of Brahmos provides Indian warships the capability to precisely neutralize selected targets deep inland, far away from the coast, from stand-off ranges at sea,” an Indian Navy source said at the time of the test.

India has also repeatedly talked about trying to export the missile, claiming interest from a seemingly endless number of countries. Although no sales have thus far materialized, Mishra once again reiterated that “several countries have shown interest in acquiring the missile system.”