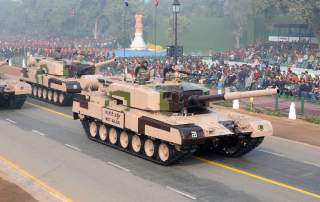 Key point: Russian state media has reported that India is interested in the Armata as the basis of a new, localized tank.

DRDO is busy at work designing Arjun Mk II, which will allegedly contain many improvements over the original Mk I. The Indian Army for its part is adamant it wants no part of the Mk II until prototypes perform satisfactorily, and would much rather buy an overseas tank. The army, for now, prefers the Russian T-90 tank and may express interest in the brand new T-14 Armata tank. Russian state media has reported that India is interested in the Armata as the basis of a new, localized tank. Whether that’s true remains to be seen.