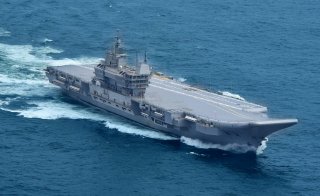 India's first indigenous aircraft carrier (IAC-1), the largest and most complex warship built in the subcontinent, set sail on Sunday for her second round of sea trials. The 45,000-tons INS Vikrant had previously completed a five-day maiden sea voyage in August and is on track for her planned induction into the Indian Navy by August 2022.

INS Vikrant is a symbol of pride for New Delhi, and the warship, which was built at a cost of around ₹23,000 crore (approximately USD 3 million), highlighted the shipbuilding capabilities of India. The South Asian nation is now in a select group of countries that has not only the capabilities of operating an aircraft carrier but more importantly that it can build a state-of-the-art warship.

India has operated carriers in the past, but those included former Royal Navy warships, while the Indian Navy's current flagship carrier, INS Vikramaditya, is a former Soviet-built Kiev-class carrier. She entered into service in 2013.

An indigenously-built carrier marks a significant leap forward in the capabilities of India, even if progress on the ship has at times seemed slow-moving. Design of the carrier, which was built by the Cochin Shipyard Limited, began in 1999 but the keep wasn't laid until February 2009. She was subsequently floated out of her dry dock in December 2011 and launched in August 2013.

With a length of 262 meters and a beam of 62 meters, the carrier will also be among the smaller flat tops in service around the world, and at 45,000-tons will only be around 67 percent the size of China's existing aircraft carriers, which displace around 65,000 tons. However, while smaller, the capabilities of INS Vikrant are believed to be comparable to that of People's Liberation Army Navy (PLAN) vessels. Like those carriers, she features a STOBAR (Short Take-Off But Arrested Recovery) configuration with a ski jump.

The warship will have an air component of thirty aircraft, and will reportedly operate with twenty-six Russian-designed MiG-29K fighters (NATO reporting name "Fulcrum"), as well as ten Kamov-31 early warning helicopters and/or an equal number of MH-60R helicopters.

INS Vikrant is powered by four General Electric LM2500+ gas turbines and two Elecon COGAG (Combined gas turbine and gas turbine) gearbox driving two shafts, and the carrier will be able to reach a top speed of thirty knots (fifty-six km/h) with a maximum cruising range of eight thousand nautical miles (fifteen thousand km). The ship will have a crew of 196 officers, 1,449 sailors including aircrew—it is unique amongst warships in that it will have specialized cabins to accommodate female officers.

New Delhi has been focusing on significantly bolstering its overall naval capabilities in view of China's growing efforts to increase its military presence in the Indian Ocean Region, which is considered the backyard of the Indian Navy and is thus critical to the country's strategic interests.