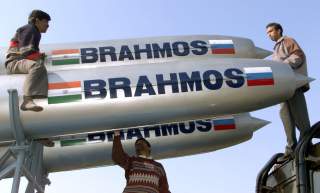 Key point: New Delhi's Su-30 jets are very formidable and armed with nuclear weapons they will play a greater deterrence role. The question is how Pakistan will respond.

The Brahmos is jointly developed by India’s Defense Research and Development Organization (DRDO) and Russia’s NPO Mashinostroeyenia. Capable of traveling at speeds of Mach 3.0, the Brahmos is the fastest cruise missile in the world. As Russia and India Report explained, “The BrahMos’ 3000 km per second speed – literally faster than a bullet – means it hits the target with a huge amount of kinetic energy. In tests, the BrahMos has often cut warships in half and reduced ground targets to smithereens.”

Zachary Keck is a former managing editor of The National Interest. You can find him on Twitter: @ZacharyKeck. This article originally appeared in April 2015.