India's Violation Of Nepalese Sovereignty Is A Gift To China 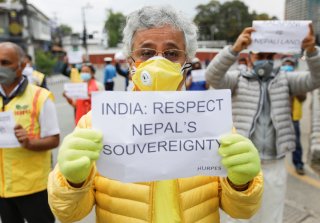 Nepal, as a small neighbor mostly surrounded by India, and with Tibetan region in the north, has been living under Indian heavy-handedness for a long time. Right now, however, there are strong voices in the country calling for the government to confront India head on. The nationalist commentators are in the mood of either kill or cure.

India changed the status quo of the disputed territory of Kalapani between Nepal and India without any consultations with Nepal. First, in 2019 November, India issued a new political map which included those territories. Nepal protested, but India officially responded by stating that the boundary is accurate and dismissed Nepal’s plea to sit for talks. Then, in May 2020, India suddenly inaugurated a new road section through the areas to the Tibet border at Lipulekh Pass. Nepalese were agitated but nevertheless asked India to resolve the matter through talks. However, such pleas fell on deaf ears, which prompted Nepal to issue a new political map. Said new map goes further into “Indian territory,” which was not actively disputed, and has led the “special relation” to such a low that has further aggravated the stability in the region—especially at the time when Indian and Chinese soldiers are at a standoff along the Line of Control (LAC).

However, India, though a rising global power, has shown little maturity in terms of dealing with such simmering discontent in its sensitive neighborhood, which India itself has caused. First, India’s Chief of Army Staff General Naravane made an awkward statement insinuating that Nepal was acting upon Chinese behest, either in total ignorance of or blatant disregard for the history and previous exchanges between Nepal and India on the matter. Second, India’s Ministry of External Affairs has simply given statements supporting India’s unilateral act and seemed uninterested even in a call with the Nepalese government. This is not to mention that most Indian public narratives put the whole blame on Nepal prime minister KP Sharma Oli’s “nationalism” and “cynicism” by downplaying India’s own missteps of the past and Indian excesses in building infrastructure through lands that Nepal sees as its own sovereign territory.

India’s use of “nationalism” as an argument is puzzling because India blames Chinese nationalism for its own excesses at the LAC along the India-China border. And when Nepal protests India’s excesses on its border, India puts the blame on Nepal’s nationalism, arguing in either cases that India is the righteous actor. India’s intransigence to not go beyond its cliché arguments that Nepal has more benefits in the bilateral ties and India inflating Nepali leaders’ nationalism for India’s domestic consumption as well as to increasingly push Nepal into China’s fold—and this time India has gone very far in this, just has Nepal in its strong reaction. In the name of special relations and cultural ties, India has crossed the limits of international law and norm, therefore, such a reaction by Nepal was inevitable. Therefore, the United States should nudge both countries to come to a peaceful and correct solution. As far as India’s neuralgia in external mediation for its border issues is concerned, this is neither India-China nor India-Pakistan conflict—Nepal is India’s “special neighbor.”

Dr. Anil Sigdel is the director at Nepal Matters for America in Washington DC. He is the author of the forthcoming book, India in the Era of China’s Belt and Road Initiative, from Rowman and Littlefield’s Lexington Books, Washington.