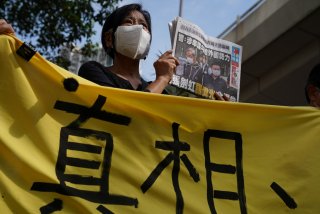 What are tyrants most afraid of? To answer that question, one must look at where they allocate their resources. Dictators like Iran’s Ayatollah Ali Khamenei and North Korea’s Kim Jong-un spend billions to keep their citizens in the dark. They spare no expense to ban social media and suppress the Internet. They jail journalists and bloggers. They fund massive security agencies to silence their people.

What dictators fear most isn’t foreign militaries. What they fear most are their own citizens. Why? Because an informed citizenry is capable of vanquishing every myth tyrants desperately seek to preserve.

Yet many Western nations fail to understand this elementary truth. That is why we spend billions on military hardware yet a fraction of that on the tactics that can actually defeat extremist ideologies and tyrannical regimes: political warfare and information operations.

Though these tactics don’t line the pockets of the military-industrial complex, they are devastatingly effective.

The truth is that dictators are beating the West when it comes to sophisticated information operations. Authoritarian regimes are buying up media publications in order to distort global media coverage, divert attention from their crimes, and pressure their adversaries. They are hacking and leaking, producing deep fakes, and spying on journalists.

Put simply, terrorists and extremist regimes are running rings around liberal democracies. If we don’t reverse the tide, this imbalance could ultimately be our downfall. Perhaps this sounds alarmist, but from my deep knowledge of information operations, few people can imagine the scope and power of today’s disinformation campaigns by hostile actors.

...can you just address the proliferation of fake accounts? I understand annually you get 6.5 billion fake accounts produced there, but in some sense you have a profit motive that’s linked to that because that’s what is reported to your investors, the number of accounts. Are you working zealously to try to ferret out these fake accounts that are used to spread hate and disinformation?

Zuckerberg answered as unflappably as ever:

Congressman, absolutely. We work hard on this. We take down billions of fake accounts a year—a lot of that is just people trying to set up accounts to spam people for commercial reasons. A very small percentage of that are nation-states trying to interfere in elections but we’re very focused on trying to find those. Having fake and harmful content on our platform does not help our business, it hurts our business. People do not want to see that stuff—and they use our services less when they do. So we are aligned with people in order to take that down and we invest billions of dollars a year in doing so.

Thanks to these bad actors, it is hard to believe anything anymore. When the distinction between fact and fiction is blurred, the foundation of democracy is eroded. They are trying to take advantage of our core values to undermine the foundations of our societies.

What is the solution to this civilizational challenge? It is to fight back. We must use every tool at our disposal to mirror the methods that our enemies use against us. Publicly, we must double down on a political discourse that reaffirms the classical liberal foundations of our civilization—namely an abiding faith in freedom and individual rights. We cannot let political correctness slowly gnaw away at our freedoms and identity.

Behind the scenes, an army of decentralized cyber defenders must wage relentless offensive campaigns to fight back against the enemies of liberty and peace. Having worked with many such individuals, I can say with confidence that one should never underestimate the creativity and influence of a group of motivated dissidents, former intelligence operators, and human rights activists.

These cyber activists often remain in the shadows, conducting anonymous online campaigns to counter the propaganda of authoritarian regimes and expose the truth. You don’t know their names, but they are heroes.

Sadly, in this post-truth era, too many people throw around the term “fake news” and blur the distinction between the sides in this narrative war. In World War II, both the Allies and Axis alliances spread fake news to deceive their enemy. Yet it would have been senseless to condemn “deception” equally regardless of the aim of each side. It was vital that the Allies deceive the Axis and a mortal danger that the Axis deceived the Allies.

So too it is today in the war between tyrants and terrorists and the cyber-activists who fight them. The former spared no cost to win. They fight dirty and are committed to victory. It’s high time we fought back.

Joel Zamel is the founder of Wikistrat, the world’s first crowdsourced intelligence platform for conducting geopolitical studies and foresight monitoring for governments and multinational corporations around the world.