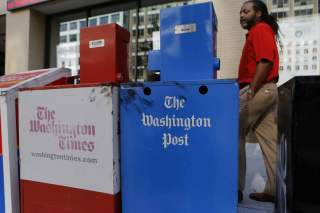 Joseph Maguire, the acting director of national intelligence, unequivocally disputed a Washington Post report published Wednesday that he threatened to resign if the White House blocked him from testifying candidly about his handling of a whistleblower complaint concerning President Trump.

“At no time have I considered resigning my position since assuming this role on Aug. 16, 2019. I have never quit anything in my life, and I am not going to start now,” Maguire said in a statement minutes after the Post story was published.

“I am committed to leading the Intelligence Community to address the diverse and complex threats facing our nation.”

The Post story cited anonymous current and former officials “familiar with the matter.”

Maguire has been caught in a bureaucratic firestorm involving the Intelligence Community Inspector General, the Justice Department and Congress over how to handle a whistleblower complaint that an intelligence community official filed on Aug. 12.

The whistleblower reportedly accused Trump of misconduct during a July 25 phone call with Ukrainian President Volodymyr Zelensky. The Justice Department said in a report released Wednesday that the ICIG said that the whistleblower relied on “hearsay” picked up from other White House officials to form the basis of the complaint.

The White House released a transcript of the call on Wednesday. It showed that Trump and Zelensky discussed U.S. aid to Ukraine, and that Trump asked the Ukrainian to look into Joe and Hunter Biden’s dealings in Ukraine.

While Democrats already insist that the transcript supports impeachment of Trump, the document undercuts some of the reporting and speculation about what Trump told Zelensky.

The Post reported on Sept. 18 that the whistleblower claimed that Trump made a “promise” to Zelensky, but nothing in the transcript backs up that claim. Trump also did not pressure Zelensky to investigate the Bidens in exchange for future U.S. assistance, as numerous Democrats and pundits have speculated.

Democrats vying to see the whistleblower complaint have accused Maguire of doing the White House’s bidding. But it has slowly emerged that Maguire withheld the complaint from Congress after consulting with the Justice Department office of legal counsel.

That office released a report on Wednesday saying that lawyers did not believe that the complaint met the threshold required to provide it to Congress.

According to The Post’s now-refuted story, Maguire threatened to resign out of frustration that he was blocked from defending his handling of the complaint. He will testify before the House Intelligence Committee on Thursday.

The complaint will be provided to the House panel and its counterpart in the Senate on Wednesday.