The International Criminal Court Must Seek Justice for ISIS Atrocities 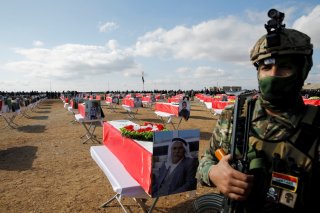 Thousands of war criminals who once fought for the Islamic State (ISIS) remain unpunished, with little prospect for speedy justice. Meanwhile, the international organization created to hold individuals like them accountable, the International Criminal Court (ICC), has been tangled in a web of poor leadership and legal uncertainty. But the situation at the ICC is changing and Karim Khfan, who was sworn in as the new Chief Prosecutor on June 16, has the opportunity to bring the former ISIS fighters to justice.

During its years-long reign of terror, ISIS fighters committed human rights abuses including genocide, ethnic cleansing, systematic rape, enslavement, forced conversions, and the use of chemical weapons against the people of Iraq and Syria. While the terrorist organization’s caliphate has since been destroyed, over 2,000 ISIS fighters from over fifty different countries remain in a perpetual state of limbo, held in camps across Syria. They will not be prosecuted under Syria’s crumbling justice system, and it is unlikely that they will be extradited back to their native countries to face charges.

The ICC has long been reluctant to get involved. In April of 2015, Fatou Bensouda, Khan’s predecessor, declined to use the organization’s power to address the atrocities committed by ISIS citing a “too narrow” jurisdictional basis. Rather, Bensouda chose to pursue an investigation into alleged war crimes committed by United States Special Forces fighting the Taliban in Afghanistan. Without prejudice to his predecessor’s politicized choices, Khan, who was the United Kingdom’s lead lawyer in a United Nations investigation of ISIS war crimes in Iraq, has an opportunity to revisit the question of ISIS fighters’ crimes, and international justice.

The ICC acts as a “court of last resort” in cases of crimes against humanity. If such crimes are identified, the ICC may involve itself as long as national proceedings are not currently underway in states with jurisdiction, or if the governments with jurisdiction are unable or unwilling to prosecute. Syria clearly fits the bill.

But Khan also must jump another jurisdictional hurdle. The ICC may claim the authority to rule on a case if the relevant crime occurred within the territory of a member state. Unfortunately, this does not apply regarding ISIS, as Iraq is a non-member and Syria has yet to ratify the Rome Statute that created the ICC. Another option is for the UN Security Council to refer the matter to the ICC Prosecutor, but this is unlikely considering Russia and China’s history of vetoing past efforts to address the situation in Syria.

Yet—and this may be the solution—the ICC may claim jurisdiction if the relevant crimes occur within the territory of a non-member state, so long as the crimes were committed by someone who is a national of a member state. Many ISIS fighters come from European nations which have ratified the Rome Statute, subjecting them to the rulings of the court. Through this avenue, Khan and the ICC can begin the process of securing justice for the half a million Syrian victims of ISIS crimes.

The Rome Statute, which established the ICC, promised that “the most serious crimes of concern to the international community as a whole must not go unpunished.” However, justice for victims is not the only reason why the ICC must vigorously pursue the prosecution of former ISIS fighters. Simply leaving ISIS members and their families in camps has led to growing radicalization. In Al-Hol, a notorious refugee camp in central Syria, 900 U.S. troops continue to assist the Syrian Democratic Forces (SDF) in rebuffing a resurgence of the terrorist group. Earlier this spring, the SDF arrested “125 people [in Al-Hol] suspected of having direct ties to IS, including six they have described as senior leaders.” The threat of a resurgence incubating in these camps is ongoing and immediate, with U.S. General Frank Mackenzie stating that children in such camps are “being radicalized every day by ISIS.”

As the court enters a new era of leadership, Khan has the ability to improve its international standing—and to reassert its legitimacy. Now is the time to prosecute ISIS fighters, and Khan is the ideal Chief Prosecutor to get the job done.

Ivana Stradner is the Jeane Kirkpatrick Fellow at the American Enterprise Institute.

Eileen Walsh is a research assistant at the American Enterprise Institute.